The Sands of Summer – Top Sand Sculpting Competitors and Competitions

Summer is synonymous with the beach, and every year, thousands migrate to warm sands and cool waters to enjoy life at the water’s edge. And while some people try to make sand castles, others sculpt works of art.

Take Matthew Deibert and Sue McGrew, professional sandsculptors, also called the “sand masters.” With more than 20 combined years of experience, Deibert and McGrew have showcased their talent across the globe on beaches, in museums, and even on piers.

Deibert has sculpted professionally for more than 15 years and runs the business, Sandcreation, which provides sand masterpieces for special events. When we originally caught up with Deibert, he was on a break from carving sand for the Atlantic City Beer and Music Fest. The sculpture included the festival’s logo with the city’s distinctive buildings on top of a sudsy beer glass. 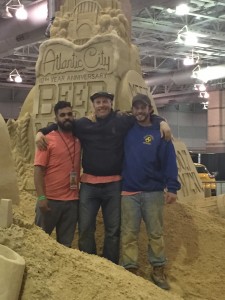 “People loved it,” says Deibert. “I actually added bubbles to it and dry ice. It was spectacular.”

One of Deibert’s most memorable adventures in sand sculpting took him to France for the 60th anniversary ceremony of D-Day.

Recalls Deibert, “We were sponsored by The White House Commission on Remembrance, and they flew myself and the guy who I learned how to sculpt with, John Gowdy, over to France.”

Deibert met up with artists from other countries involved in the D-Day invasion, and the sand sculpture itself included sands from the five different beaches of Normandy. Gathering the sand proved an entertaining challenge.

“When we all showed up—the five artists—it was like, ‘Okay, who’s going to run the back-hoe?’” Deibert laughed. “I jumped right in there. I have a little experience, but it was also on-the-job training.”

“We put a pile of sand up above the high water mark,” explains Deibert, “and we sculpted the soldiers in the Higgins ships that are landing on the beach.”

Related Story: The Magic of Ballooning–The Best Balloon Festivals Around the Globe

“It was really special to be there. They had a lot of vets that were telling their stories, and for some of them, it was their first time back since the invasion,” says Deibert.

Likewise, McGrew’s sand sculpting has taken her all around the world, from Europe down to Central America, and over to Asia, including Japan, which was where she was when we reached out. McGrew worked at the Sand Museum in Tottori, Japan, which displays sand masterpieces from April through January the following year on a specific topic. This year’s topic was Germany, and McGrew carved “The Fall of the Berlin Wall.” 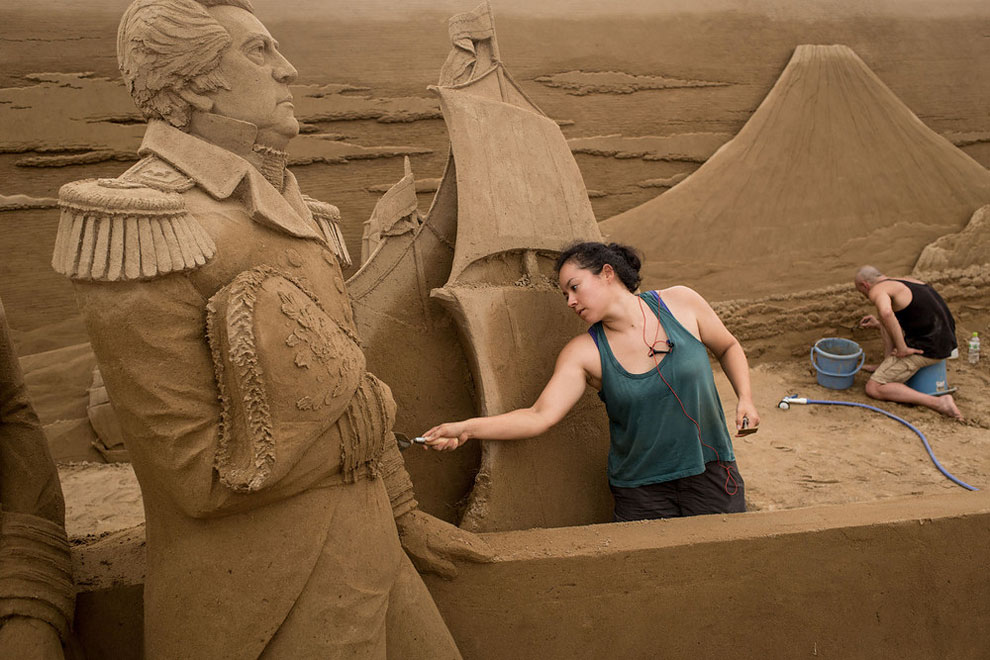 McGrew also competes in competitions, and her most memorable win was in the solo division at the Virginia Beach Neptune Festival.

Recounts McGrew, “The event was right on the beach, and we were hit with a giant storm with hurricane force winds. It was an epic battle against nature and time as we all struggled to finish our pieces.”

McGrew’s sculpture was entitled “You Complete Me,” which she explains as a “Romeo and Juliet-like scene between a mermaid and a ‘fish’ man, the opposite of a merman with the head of a fish and the body of a human.”

The sculpture won the Judges’, Sculptors’, and People’s Choice awards.

“It was incredible euphoria to survive not only the weather but to feel like I could compete alongside the professionals.” 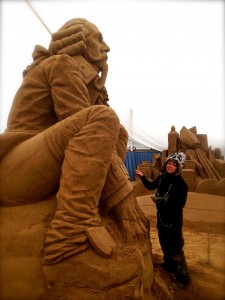 Baron von Munchhausen traveling on a canon ball in Rugen 2013, by Sue McGrew

Both Deibert’s and McGrew’s work has led them to participating in different TV programs. Deibert’s work has been featured on the Travel Channel’s Sand Blasters 2007 and 2008, and more recently, he was the winner of SandWars in 2012 with his son, Ian.

They were “treated like royalty,” he adds. Not only does being invited mean a sculptor has reached a certain level of expertise, but the show also pays for the competitors’ travel, food, and lodging, and they also have a chance to win prize money.

“We were just happy to be there,” remembers Deibert, “but to make it even better, we actually won the contest and the prize money, which was really cool. But it was just special, just going, being a father-and-son team, and since then, we’ve carved together.”

Ian Deibert helps his father with Sandcreation projects, and was on hand for the Atlantic City Beer and Music Fest project.

McGrew was a part of The Travel Channel’s Sand Masters and Sandblaster III—the Extreme Sand Sculpting Competition. When filming Sand Masters, she happened to be in Thailand during Sonkgran, their traditional New Year’s celebration.

“This holiday is celebrated by ‘blessing’ people with water, which means it’s a countrywide water fight for three days,” recounts McGrew. “There is absolutely no way to stay dry! It’s just buckets of water flying from all directions. Even the police are ‘blessed’ on the streets, and I was ‘blessed’ on my way through airport security by a guard.”

Related Story: Save the Date – Upcoming Events for 2015 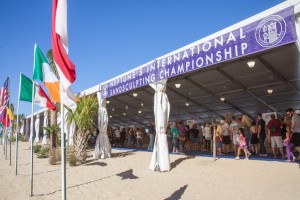 As a member of the Atlantic City Fire Department for 23 years, and captain for more than 11, Deibert has to pick and choose which contests he can enter.

“Sand is a hobby, a part-time thing,” he explains. “It’s grown. I have to turn down work sometimes because I can’t get off to carve, and the way my schedule works out, sometimes I can do quite a few of them, which is nice.”

Deibert’s favorite competition is the International Sandsculpting Championship at The Virginia Beach Neptune Festival, which he has been attending for 12 years. The festival’s signature event hosts 32 sculptors under one tent.

Notes Deibert, “Between the organizers, the way it’s set up, how they developed it, and how much time, effort, and money they put into the contest—it’s the best in the world.”

Deibert enjoys going down year after year and seeing familiar faces and battling against international superstars in the sandsculpting world.

“I’ve been very fortunate enough to place,” he says. “It’s a world-renowned competition. You’re competing against artists from all over the world. If you place, you get an automatic invite back.”

Donna Tate, who has been chairing the sandsculpting event at Virginia for 26 years, says that each competition is better than the one before, so it’s hard to pinpoint a favorite sculpture.

She says, “There have been so many! Some come with stories, some from simply being awestruck. No way to pinpoint ‘one.’ They are almost all my favorite.”

The artist value of the art is what is truly captivating at the International Sandsculpting Competition.

“Sand art, like other art, is very subjective, and each sculpture is special. As is each sculptor, I feel privileged to have worked with the artists over the years and continue to be amazed. I really look forward to this year as we will have many returning ‘winners’ and exciting new talent as well. Unbelievable how each year is the best yet!”

Though the Neptune Festival spans the month of September, this year’s sand sculpting competition runs Sept. 25 through Oct. 4, and involves meet-and-greets with the sculptors, “QuickSand” competitions (speed sculpting contests), live music, and walkways and viewing areas of the sand sculpting process and artwork.

“The downside, if there is one, is the temporary aspect of the art, permanence is in memory only,” explains Tate. “Photos are a simple reminder, but it is difficult to capture all the details or do justice to them. You must ‘view’ them.” 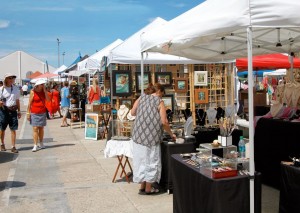 McGrew lists her current favorite competition as the U.S. Sand Sculpting Challenge in SAND iego™, and unlike the Neptune Festival, which takes place on the beach, this competition is held on the “B” Street cruise ship terminal pier.

“It’s a really unique venue,” McGrew says. “It’s not on a beach, but they bring good quality sculpting sand to a pier, so you’re sculpting on the water in the middle of a busy city! They invite some incredible international artists, and it’s always beautiful weather there.”

Last year, the competition drew more than 46,000 people, and according to Gordon Summer, the competition’s representative, they expect to see more than 50,000 this year. But what makes this festival a favorite of sculptors and attendees alike?

“The sculptors absolutely love the location,” boasts Summer, “and this is San Diego. What’s not to like about San Diego?”

Attendees enjoy the big bands, mostly from the San Diego area, a beer garden, kids rides and entertainment, and the festival’s second biggest feature: dimensional artists, who bring more than 1,000 works of art to sell.

Notes Summer, “Sand sculpting is dimensional art, but people can’t take the sand sculptures home. They weigh 10 tons or more. If you could get it home, it would ruin your carpet, so in order to satisfy the need to buy souvenirs or buy some art mementos or décor, we have about 40 or 50 artists who work in metal, wood, glass, and fabric.” 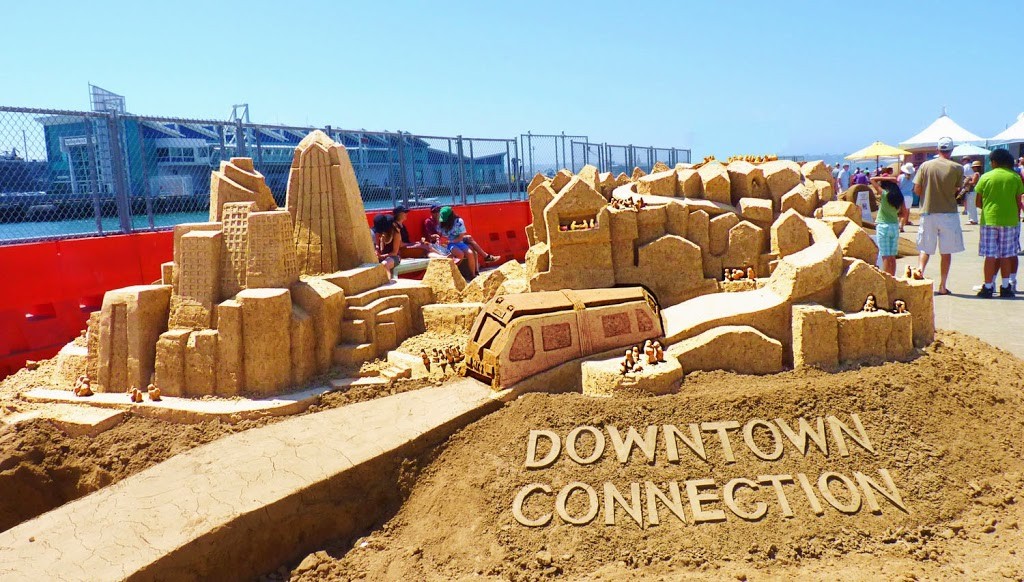 The festival donates a third of all net proceeds to charity. Some of their recipients are the San Diego School for Creative and Performing Arts, the Maritime Museum of San Diego’s kids educational program, Young Audiences of the San Diego, and It’s All About the Kids Foundation.

The exposition takes place over Labor Day weekend, starting on Friday when all active police, military, firefighters, and EMTs receive free admission with three family members. Sculptors actually begin their works on Wednesday, so by the time viewers see the works of sand art, they are approximately halfway through the process. The competition ends at 2 p.m. on Saturday, but the judging results aren’t made public until Sunday morning.

Upcoming competitions for Deibert include the Virginia Neptune Festival, while McGrew will be competing in contests in Parksville, British Columbia; Revere Beach Boston, Mass., and Toronto, Canada.

Admission: $5 for the sandsculpting tent for adults; children 12 and under free 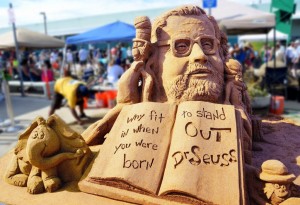 Admission: Last year’s price was $7-$12, and Summer, representative for the festival, says this year’s will also be “reasonable”