Walt Disney World® is huge. And usually packed. And the fact is, it’s no longer a viable option to just walk through the gates and wing it – especially if you’re on a once-in-a-lifetime kind of trip and you want to make memories of more than just standing in lines. With that in mind, we’ve put together a series of itineraries to help you plan your way through the most magical place on Earth. Today, it’s time for the most wild of the Disney World parks– Animal Kingdom®. 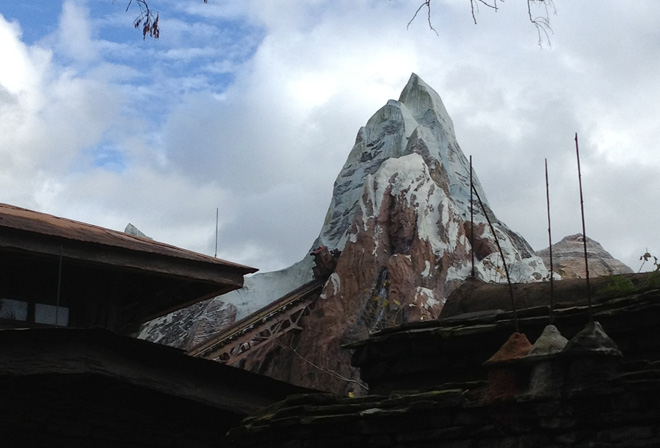 Why challenge Everest? Because it’s there, of of course.

Animal Kingdom is a beast. The Kilimanjaro Safaris® alone have enough area to cover the Magic Kingdom®, and that’s only one adventure, so how will you navigate this journey that includes stops in Asia, Africa, Discovery Island®, the Oasis, DinoLand U.S.A., and Rafiki’s Planet Watch? Easily. Animal Kingdom has hills, winding trails, and long treks, things other Disney World parks don’t, but because of the large area, Animal Kingdom hardly seems packed. Its rides, despite their awesomeness, have lower wait times and are spread throughout the park, but that doesn’t mean you can sleep in before hitting this park either. Since Animal Kingdom closes the earliest (in order to meet all the animals’ needs), you have less time to explore. So get there at nine!

Though the trek from the opening land of the Oasis to Asia is quite long, start at the park’s most popular ride, Expedition Everest—Legend of the Forbidden Mountain. Everest is one of the Disney World’s most aggressive roller coasters with an 80-foot drop, backwards motion (riders almost go upside down), and an encounter with a Yeti. It can be scary for someone who is afraid of heights, and the drop is long enough that even once you’re done screaming, you’re still dropping. But it’s a great ride for tweens, teens, and adults, and the wait isn’t too long. It’s generally never more than 80 minutes even during Disney’s peak seasons, and it’s one of the “shorter” waits with bells to ring at a monastery, faux equipment and pictures from past expeditions to see at a mountain lodge, and numerous fans to keep adventurers cool.

Next, head to DinoLand U.S.A. for DINOSAUR. This ride also doesn’t have a long wait, almost never more than 25 minutes, but it’s one of the most fun. You get in a “Time Rover” and blast into the past to save a dinosaur from extinction. No doubt, it’s scary for kids with loud noises and sudden turns, and a T-Rex actually runs after your car. Seriously. It does. But it’s a fun, bumpy adventure, and if you loved Indiana Jones™ Adventure at Disneyland (which has wait-times exceeding 100 minutes), you’ll love this ride because it’s the exact same journey just without Indie.

Related Story: One Day In – The Magic Kingdom

While in DinoLand U.S.A., scream on Primeval Whirl. It’s a quasi-Wild Mouse that spins (A teacup roller coaster?) for pretty wild thrills, and you can also see a few characters here like Goofy and Pluto with short lines.

You’ll definitely have to check out Finding Nemo—the Musical, also in DinoLand U.S.A. A spectacular show with stunning theatrical puppetry and 14 new songs, this performance is the first time Disney took a nonmusical animated feature and made it into an original musical production. The musical is 40 minutes, so you’ll definitely want to plan accordingly.

Afterwards, wrap around for Discovery Island where you can grab some food from Flame Tree Barbecue with smoked BBQ ribs, chicken, turkey legs, and for those health conscious guests, freshly tossed salads. There’s also Pizzafari for pizzas, sandwiches, and salads.

Experience the Tree of Life and It’s Tough to be a Bug!®, one of the treasured shows at Animal Kingdom. Flik and the gang introduce some of the bugs we take for granted in everyday life, and the theatre is in the Tree of Life, giving guests an up-close look at the numerous animals carved in the trunk as they walk the windy trails to the entrance. The show is undeniably cute with tiny surprises (no pun intended), but fair warning to all those arachnophobic guests, spiders do play a role in the performance (but you’ll be fine).

Next up, check out Kilimanjaro Safaris®, which will take you deep in the African savanna for a close encounter of the wild kind. More than 34 different species roam free inside the 110-acre Harambe Wildlife Reserve, including black rhinos, giraffes, hippopotamuses, lions, elephants, and more. Guests take an “open-air safari vehicle”—it’s pretty much a huge, souped-up jeep that takes you on a bumpy ride to see the animals. Be prepared to wait for this ride, or schedule a fastpass earlier with MyMagic+®. However, this is the best ride to see the animals, so it’s well worth it.

Once you get back, cool off at the Festival of the Lion King, a Broadway-style show that gives guests 30 minutes of air-conditioned comfort plus exceptional entertainment with tribal celebrations, favorite songs from the movie, and fantastic costumes and performances.

Finally, to end the day, take a walk on the Pagani Forest Exploration Trail®to see gorillas, hippos, and exotic birds from Africa; or enjoy the Maharajah Jungle Trek® with Southeast Asian wildlife, like tigers, bats, and Komodo dragons. For one last ride, jump on the Kali River Rapids for a thrilling whitewater ride along the Chakrandi River. It also involves a 20-foot slope drop, so when you get wet, your next stop will be the hotel to change and eat dinner.

Despite its early evenings, Disney’s Animal Kingdom® Theme Park has a full-day of activities and entertainment for you and your family to enjoy, so don’t waste a second while you explore the jungles, mountains, and history of the world, all with a healthy helping of pixie dust.