One Day In: Disney World – The Magic Kingdom

Walt Disney World® is huge. And usually packed. And the fact is, it’s no longer a viable option to just walk through the gates and wing it – especially if you’re on a once-in-a-lifetime kind of trip and you want to make memories of more than just standing in lines. With that in mind, we’ve put together a series of itineraries to help you plan your way through the most magical place on Earth. And we’re starting with the granddaddy of Disney World parks – the Magic Kingdom®. 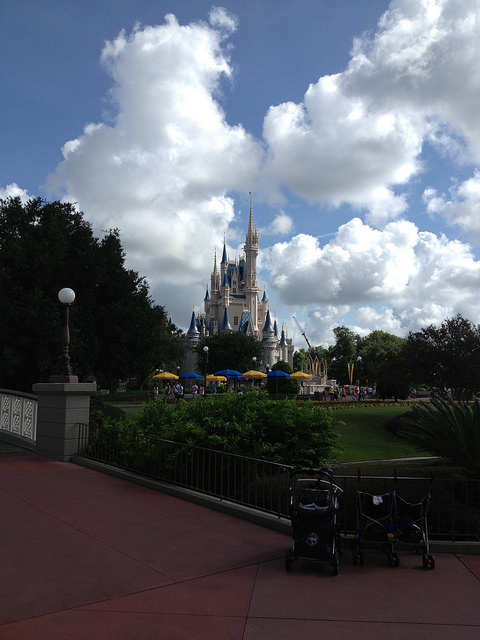 Is it just us, or does that cloud on the left even kind of look like Mickey?

The first step is also the most important: arrive at the park at 8:30. If you want a sleeping-in kind of vacation, you’re in the wrong place. The park opens at 9, so planning to be there 30 minutes early will let you be among the first to get in – a huge advantage when trying to take in the whole park in one day. Plus, you don’t want to miss the Magic Kingdom Welcome Show, which starts about 10-15 minutes before the park officially opens.

One of the most exciting shows is the one welcoming you to the park!

The gates open! Welcome to the Magic Kingdom®! The park is divided into six sections, and all of them are worth a look – but not right now. Right now is all about getting on the best ride before the lines start to get ridiculous. If you’ve got older kids (or are on a kid-free Disney vacation – yes, that’s OK!), head straight for Frontierland® and you can ride both Splash Mountain® and Big Thunder Mountain faster than you can say Bibidi-Bobbidi-Boo. With younger kids, make for Fantasyland®, where they can enjoy the Mad Tea Party, Dumbo the Flying Elephant, and – for daredevil kids – the Barnstormer, starring the Great Goofini! (And of course It’s a Small World, which can prompt either squeals of delight or horrified groans.)

Now that you’ve got the big ones out of the way, head back towards the entrance and start a circle of the park – clockwise, if you please, as most visitors do the opposite. This means you’ll start in Adventureland® – and lucky you, the line for Pirates of the Caribbean® is still short! Check out the Tiki Room, Jungle Cruise, or say hi to Tinker Bell and her fairy friends before you move along. And don’t forget to meet Peter Pan! (Seriously, some of the best character actors in the parks play Peter. They’re phenomenal).

Related Story: Show Your Disney Side!

When you’re done here, move into Frontierland®. If you haven’t already done the two big mountain rides, and want to, even though the kids don’t – have we got good news for you. Tell the cast members you want to do a child swap, and one parent can ride while the other waits with the kids – then you trade, without having to wait in line again. It’s probably one of the best features Disney offers for parents. 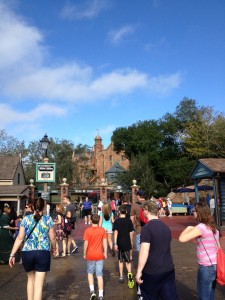 We laughed. We screamed. We had fun. This is the Magic of Disney at the famous Haunted Mansion.

Time to hit Liberty Square! There’s less here than in the rest of the park – pretty much just the Hall of Presidents (if you need the air conditioning, this is your opportunity – seize it) and the Haunted Mansion®. Do that one while everyone else is having lunch, and then eat at Liberty Tree Tavern or the Columbia Harbour House. By now it’s probably about time for the afternoon parade, so either grab some ice cream and find a spot to stand, or get ready to hit a bunch of rides and character meets while everyone else is at the parade – there’s no shame either way.

You can walk through Fantasyland® and meet some characters, but if you’ve got young kids you’ve already done most of what’s here, and there’s not too much for older kids in the area (unless you’re desperate to ride It’s a Small World – possibly again. Is the song stuck in your head yet?). The exception is Mickey’s PhilharMagic, of which we’re huge fans. If you need to get out of the heat, or just really want to see a show with lots of magic and laughs (and excellent 3D – in fact, it’s technically “4D”), give it a shot. It’s one of the highest-capacity attractions in the park, so wait times usually stay low. Behind Fantasyland®, though, is New Fantasyland® – and that’s worth a look. Enchanted Tales with Belle is charming, and usually includes audience participation, and the Seven Dwarfs Mine Train is quickly becoming a new classic. From the interactive queue for Journey of the Little Mermaid to the Tangled-themed rest area, this part of the park is – in a word – delightful.

Alright, you’ve made it to Tomorrowland®. There’s a lot to do here, but the favorites are definitely Space Mountain® (a classic roller coaster!) and Buzz Lightyear’s Space Ranger Spin (shooting at aliens from a spinning car? Yes please). Some people (like certain ones in our office…ahem) will try to convince you that the Carousel of Progress is a must-see, but there’s no really compelling reason to see it. That said, there’s also no compelling reason to skip it, so it’s entirely up to you.

Congratulations! You’ve done Magic Kingdom® in a day! Now, it was probably a pretty grueling day, so we understand if you want to head back to your hotel for a rest. But we’d like to point out one thing – Wishes™, the fireworks show over Cinderella Castle every night. And Celebrate the Magic (a stunning light show set against the backdrop of the castle), and the Main Street Electrical Parade. OK, that’s more than one thing. The point is, there’s a lot to see and do in the Magic Kingdom® after the sun goes down – especially since that’s when some of the lines are at their shortest, if there’s something you didn’t get to during the day or a ride you’ve just got to go on one more time. So keep the magic alive as long as possible – because sooner or later you’ve got to head home. 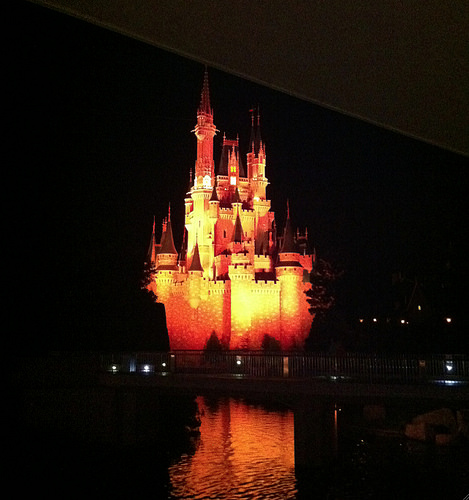 It’s totally ok to cry during Celebrate the Magic. I mean, when Walt shows up? We sobbed.

So there you have it – one day in Magic Kingdom®. Now, we know this is a bare-bones itinerary, and your family might have to make all sorts of changes. For instance, we didn’t talk as much as we’d like about all the amazing characters you can (and should!) meet, the shows you can see, and the rides you can experience. Also, Fastpass+® has made it even easier to ride and see everything you’d like, and can make your trip even more memorable. No matter how you do it, we hope you love the Magic Kingdom® as much as we do! And tell us your favorite parts in the comments!