Elvis Is in the Chapel: Getting Married in Vegas with The King

Brendan Paul has been an Elvis impersonator at the Graceland Wedding Chapel in Las Vegas for more than 20 years, where The King of Rock ‘n’ Roll can either marry you or be a guest at your wedding. But how does one become a wedding-officiating Elvis impersonator, and just how can you get The King(s) at your ceremony? We spoke with Brendan in between weddings to find out!

Q: What made you want to become an Elvis impersonator?

A: I grew up in Los Angeles and played guitar in bands, original music, and once I discovered the blues and early rockabilly, I discovered Elvis and liked him. I went to UCLA, getting a degree in fine art, and since I had dyed black hair and little sideburns, I looked like Elvis. Someone hired me to sing “Happy Birthday” as Elvis in the dorm. I didn’t have a costume, but I wore my sport coat. Then an acquaintance asked, “My dad’s a director and is having a party in Hollywood, Beverly Hills. Can you come sing?” Next thing I knew, I was a part-time Elvis impersonator while finishing up my degree. When I graduated, my parents said, “Why don’t you go to Vegas and see what happens as Elvis?” I moved here the summer of 1995, and I auditioned for a show, Legends in Concert, and started traveling the world with them. Twenty years later, I’m still rocking.

Q: From what era of Elvis do you get your inspiration? 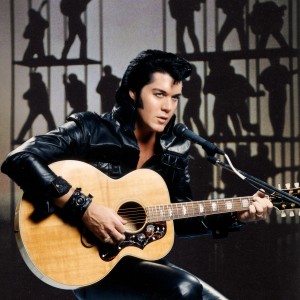 Q: What songs do you sing during the ceremonies?

A: The most popular songs are “Love Me Tender” and “Can’t Help Falling in Love with You.” Those go over great. Once they pronounce the couple, we always go into “Viva Las Vegas” unless they want something different, like this morning a German couple wanted “Jailhouse Rock.” But for the most part, it’s “Viva Las Vegas” at the end, and we get them dancing down the aisle, get all the guests singing, and it’s a hoot.

Q: Do you actually officiate the weddings?

A: Yes, I do. I just got ordained, so we can have Elvis officiate or some people want Elvis to be part of it. Sometimes the couples are split. The groom wants Elvis, but the bride’s family’s here and the parents don’t want Elvis officiating. In that case, we’ll have a minister do the ceremony, and Elvis will bring the bride down the aisle and sing, but It’s a mixture with a minister in a suit and Elvis in the corner going nuts in a jumpsuit.

Related: The New, The Exotic, and The Mega of Vegas…Baby

Q: Has any groom come dressed up as Elvis?

A: Yes, especially from Spain. The grooms always dress up like Elvis, and the brides for some reason dress up like Marilyn Monroe. When I walk in and see a Marilyn in a bad wig with dark routes, I ask, “What part of Spain are you from?” It’s always Elvis and Marilyn. 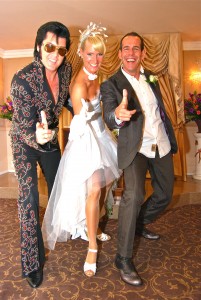 Q: How did you become part owner of the chapel?

I bought the chapel in 2000. I worked here since I moved here in 1995, and the previous owners were going to sell it. I had been a successful Elvis impersonator for years at that point, and the owners said, “You’re the only guy I know who could possibly buy the chapel. Would you be interested?” As an Elvis impersonator, it’s not like you have a 40-year career. In fact, I’ve done this for 20 years [laughs], so I thought it could be good to have a business I’m already performing at and it’s fun.

Q: How many Elvises do you have at the chapel?

A: We use about four different guys, and it’s nice because they all work at different shows downtown. I celebrate the majority of the wedding because I think it’s good to be here, and I enjoy it. But we do have three or four other guys, and we even a dueling Elvis package, which is Elvis with the jumpsuit and then we have another Elvis from the younger 50’s Elvis. We go back and forth doing songs, and people love it because it’s like two different eras of Elvis’s career. It makes for great photos, too.

Almost 75% of all weddings at the chapel involve Elvis in some capacity.

The average wedding is about 15 minutes, and on busy days, the chapel does four an hour, almost never being behind by more than five or six minutes, including photography.

The chapel does about 200 a week, though Brendan has sung at up to 130 wedding a week himself, with his busiest day celebrating more than 45 weddings.

The busiest day for weddings is Valentine’s Day, Leap Year, and New Year’s Day, as well as special days, like 11/11/11.

The most popular day at the chapel is Saturday.

The chapel seats 45 guests, but the average wedding celebrates with 10.

About 50% of the chapel’s weddings are legal; the other 50 are vow renewals.

The original structure was built in the late 1920s, but it celebrated its first wedding in 1947. Elvis even visited the chapel, and Jon Bon Jovi was married and renewed his vows twice at the chapel.

Like The Hangover, the chapel does get “walk-ins,” but only about two or three couples a week. “That’s not to say that they just met like two hours before,” says Brandon. “Chances are they’ve been together and just decided to come to Vegas without a reservation.”