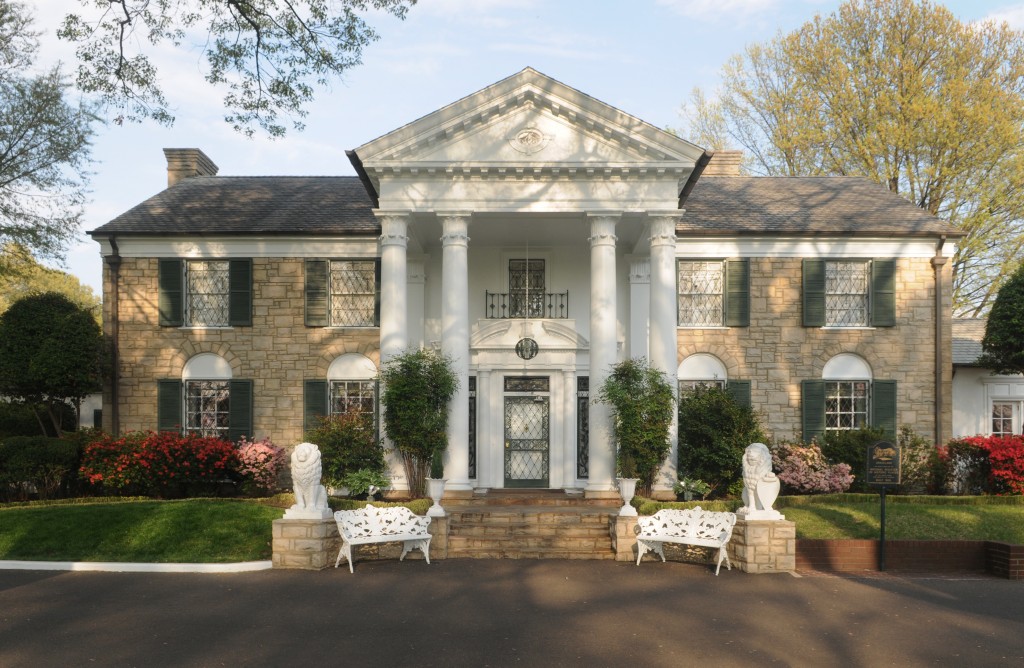 Elvis Presley died in 1977 from “cardiac arrhythmia,” meaning his heart was beating irregularly and eventually stopped. Now made famous as “The King of Rock ‘n’ Roll died on the throne,” the event has caused much speculation for many factors, including an autopsy that didn’t mention prescription drugs as a cause; pathologists from the hospital who suggested drugs such as codeine, Valium, and morphine played a role; the complete autopsy report sealed until 50 years after Presley’s death; the misspelling-but-not-misspelling of Presley’s middle name on his tomb; among others.

Some speculate that Presley grew tired of the limelight, or helped with a mafia takedown and went into the Witness Protection Program, or faked his death to receive post-mortem cash. 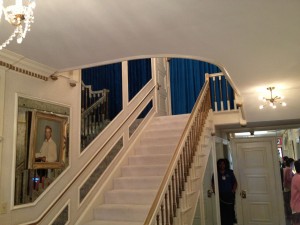 Behind curtain number one…

Since The King’s death, Presley’s Memphis haven, Graceland, has become a national treasure, welcoming more than 600,000 diehard fans a year. These fans travel from all over the world to visit the Presley’s home, proudly boasting how far they have journeyed on Elvis Radio, which broadcasts live from the visitor’s center across the street from his home.

We (my Elvis-fan mom, sister, and I) started our investigation at the visitor’s center, which housed exhibitions on The King’s cars, Presley’s custom jets, and Elvis’ Hawaii: Concerts, Movies and More. Though we definitely saw The King’s touches with the golden plated seat belts, suede chairs, and leathered tables on the Lisa Marie, we did not see the Hunka Hunka Burning Love Himself. So we boarded a bus for a roundtrip adventure across the street to Graceland.

Insider Tip: Buy the Graceland VIP Tour pass. The wait for the buses can be long, especially in the middle of the day, and the VIP tickets let you skip the line and get a seat on a semi-private bus. It also gets you into one more exhibit, which this year is Elvis: That’s the Way It Is: 45 Years. The exhibit offers footage from a four-week engagement at the International Hotel in Vegas. 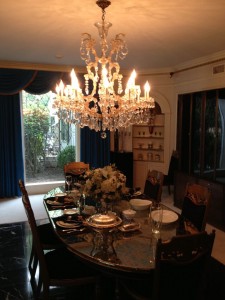 Once we passed through the music-noted fence, we headed into the foyer of the mansion, where we searched Elvis’ immaculately white living room with its 1970s furniture and style; the dining room with marble touches, a sparkling chandelier, and a photo of Priscilla and Lisa Marie; and a staircase with gold touches and a thick, royal curtain separating visitors from the family’s private area of the house (perhaps Elvis was hiding behind curtain number one?). On this level, we also searched the carpeted kitchen with its wooden paneling, vintage cabinetry, and old-school TV.

“The best part of the tour is that you can take it at your pace,” says Linda Reese, a New Jersey school teacher and Presley fan (and this writer’s mom!) who traveled more than a thousand miles to see Graceland. “You can roam the property, and you get to spend as much time as you want.”

We ventured down the mirror-lined stairs to Elvis’ equivalent of a “man cave” with a TV room complete with yellow and blue decorations, no fewer than three old-school TVs, and a white monkey statue. Also down there was the pool room with its cotton fabric-covered walls and ceiling, and red leather chairs.

“Graceland showed insight into the time period and Elvis’s personality,” Linda Reese recounts. “You can see the 1970’s décor with Elvis’ special touches, like the lightning bolt on the TV room wall.”

Heading up the green-carpeted stairwell, we finally came to the famous (or infamous) Jungle Room. The Jungle Room was The King’s favorite room, with a Polynesian feel reminding Presley of his time in Hawaii where he vacationed, performed, and acted. With a waterfall-type backdrop, grass-colored carpeting on the floor and ceiling, tropical foliage, and wooden touches, it boasts the King’s flashy style. 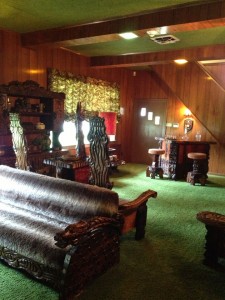 Exiting the house, we walked down the carport toward Elvis’ father’s office, where pictures and paintings of the King are displayed. Vernon Presley’s sign still hangs, warning guests that there is to be “no loafing in the office.”

The Trophy Building and Racquetball Building were next, which have been converted into celebrations of Elvis’ career. The Trophy Building displays Elvis’ Platinum and Gold Records, his original Sun records, namesake trophies, a Grammy, some of his film costumes, and even his U.S. Army uniform and Priscilla’s wedding dress. The Racquetball Building still houses his leather furniture and piano, which he supposedly played on the day of his death, as well as The King’s posthumously received awards, displays from 1972 to 1977, and Elvis’ trademark concert suits.

We could definitely feel the spirit of Elvis in these halls, but we had to collect ourselves before we visited the Meditation Garden, where Elvis, his father, his mother, and his grandmother were laid to rest. A small stone memorializes Elvis’ twin brother, Jesse Garon, who was stillborn. Serene fountains, majestic columns, and stain-glass windows gave mourning fans closure at the end of this rock ‘n’ roll pilgrimage.

Insider Tip: You may pay homage to The King at the Meditation Garden. We brought roses to lay upon the King’s final resting site, and other visitors had brought flowers, teddy bears, and other offerings.

But we weren’t done yet. Before we boarded the bus, we waved at the GracelandCam, which updates every minute, 24 hours a day, seven days a week, and it took screenshot of us!

Of course, it’s hard to refute The King’s death once you visit the Meditation Garden, but we certainly won’t close out this investigation just yet. Recently, Graceland upgraded its VIP Tours to include a new multimedia tablet tour that is narrated by actor John Stamos, and added the Graceland Archives Experience, which highlights certain artifacts not seen on the traditional house tour. Plus, next year, Elvis Presley Enterprises, Inc. (EPE) will open The Guest House at Graceland, a brand new 450-room hotel with two restaurants, meeting and event space, and a 500-seat theater. So we’ll be back in Memphis soon to check new leads.

There’s more to Memphis than Graceland. While in the city, check out the National Civil Rights Museum at the Lorraine Motel, the site of Martin Luther King, Jr.’s assassination; The Peabody Memphis, with its marching ducks; Sun Studio, where Elvis Presley first recorded; and the famous Beale Street for its rich blues history.

Delving deep into the mystery of the Maya in Conspiracy Sites: Chichén Itzá!

One thought on “Conspiracy Sites: Graceland”