Chichén Itzá was built by aliens.

Was the mysteriously intricate Chichén Itzá built by Mayans…or someone else?

Chichén Itzá rises high over the green canopies of the northern region of the Yucatan Peninsula, and El Castillo—“the castle” in Spanish—is the most recognizable structure from the Mayan Civilization, an ancient empire that stretched from what is now Mexico to Guatemala. The city is one of the New7Wonders of the World, and with its mysterious, astrological elements, it’s easy to see why. At Chichén Itzá, two structures take prominence—El Castillo and El Caracol.

El Castillo, AKA the Pyramid of Kukulkán, is a 79-foot pyramid with 91 steps on each of its four sides (91 days between each annual solar cycle—winter solstice, spring equinox, summer solstice, and fall equinox; four cycle per year; 91 x 4 = 364 days + top step = 365 days – And you thought your calendar was cool). Perhaps the most impressive display at El Castillo is the snake, formed by shadows at sunrise and sunset, that slithers down the stairway of the pyramid and joins with one of the large snake heads at the base. This phenomenon happens a week before, during, and a week after the equinoxes. 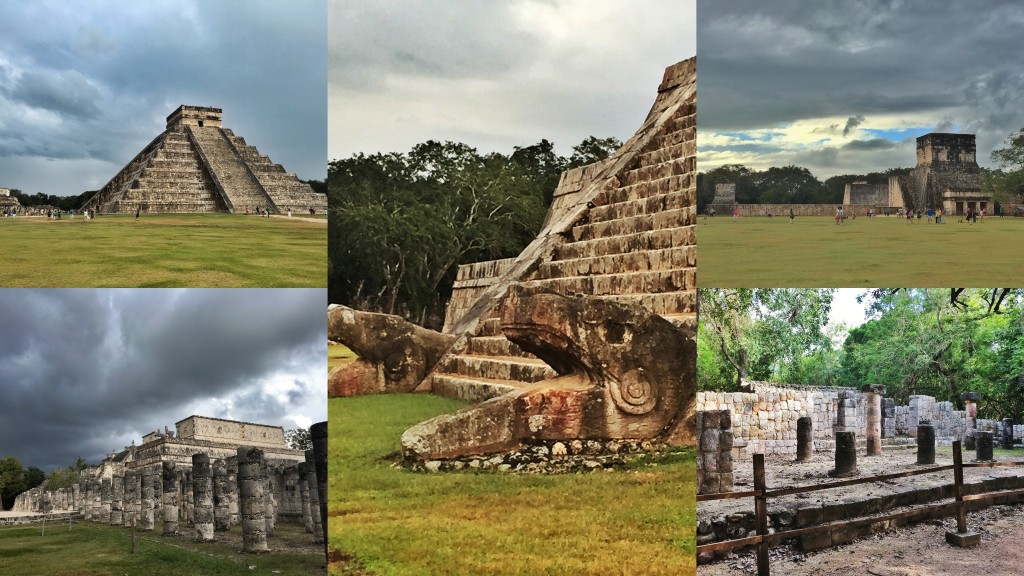 Chichén Itzá has many intricate details, many alluding to the celestial heavens above.

Another pyramid, El Caracol—“the snail”—is often referred to as “the observatory” and is aligned with the motions of Venus. The staircase at the front of El Caracol faces 27.5 degrees north of west, a perfect match for the planet’s most north position in the sky. Its summer northeast and southwest corners align with Venus’s summer solstice sunrise and its winter solstice sunset. Also, three viewing windows in El Caracol’s dome align with various celestial events.

Other structures of Chichén Itzá include the Temple of the Jaguar, the Temple of Warriors, and the Ball Court, all with significance to Mayan mythology. The Sacred Cenote at Chichén Itzá, set near El Castillo, is believed to have been used for human sacrifices.

GOGO Marketing Specialist Sarah John Afana took a 12-hour tour into the heart of the Yucatan Peninsula with Cancun Passion to see if there’s any truth to the alien conspiracy (and to see really cool ruins). The potential encounter began with a pick-up at her hotel, Oasis Tulum, at 7:45 a.m. The 20-member adventure group—consisting of fearless families, excited elderly folk, and experienced tour guides—traveled in a comfortable, air-conditioned bus, which is recommended for any journey into the unknown. The trip from Tulum to Chichén Itzá was just over 120 miles (short of a light year), which allowed the tour guides to give an informative background about the area as well as breakfast of pastries, juice, and water.

Take a dip in one of nature’s own swimming pools.

The first stop on the tour was the Ik Kil Cenote where guests have an hour to explore and shop. “There were vendors around if you wanted to do some shopping,” Afana explains. “If you wanted to go swimming, you could. They had rooms to change and lockers to keep your belongings.”

Afana chose to take pictures and wandered the area, watching as other guests dove into the large pool with natural vines and cool water, and searching for clues of an extraterrestrial presence.

“An hour seemed fast,” Afana laments. “But it was a natural pool. Nothing seemed unusual or foreign in origin.”

Next stop was lunch at a traditional Mexican restaurant with a small buffet and tasty favorites.

“They had tacos with pulled pork and unique type of chicken soup,” Afana notes. “Our drivers were adamant about the way we ate our chicken soups, and ‘don’t put cheese on the tacos!’”

We’ve heard in space, no one can hear you cheese.

Only 15 minutes from the lunch eatery was the main event, Chichén Itzá. On the way, guests of age were served a Coronita, but without the lime. In Mexico, the limes are usually served with Corona to keep the flies out of the drink. “We just like the flavor in California,” Afana laughs.

Perhaps the aliens do as well. 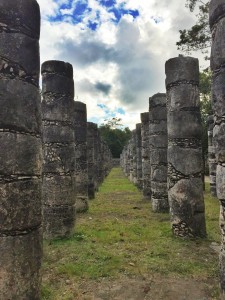 The Thousand Pillars are a mystery to many historians, believing the area might have led to a market place or other activities.

When the bus arrived at Chichén Itzá, the first thing Afana noticed was the entrance. “It’s a very large tourist attraction,” Afana points out. “It had a grand, tourist gate, like an entrance into an amusement park.”

According to Afana, the area around the ruins was huge, and she recommends guests looking to uncover proof of an alien existence (or simply see the ruins) do so before the holidays. “It was a good time of year to be there. Not too busy or too hot.”

One of the three guides on the bus disembarked with the tour and took them on a 45-minute guided tour. Afana found it enjoyable, if not particularly helpful in her quest to find the alien overlords, and she noted the effortless movements of the guides.

Afana says, “The area is well-coordinated by the tour guides because our group moved in as a pack and went from the base of El Castillo before moving onto the sides. Other groups followed the same pathway, which allowed us the opportunity to see all the areas without having to crowd around people.”

Afana was impressed because the city never felt busy, despite receiving an average of 1.2 million tourists per year.

After the 45-minute tour, the guides allowed Afana and the group another two hours to wander about the ruins, take pictures, and seek the truth of its origins. “But you can’t touch anything at Chichén Itzá,” Afana emphasizes. “No touching.”

Yes, we wouldn’t want to set off the potential death ray inside El Castillo.

Many structures of Chichén Itzá are still standing and detailed after thousands of years.

The time here, too, went quickly as there was many ruins to explore and document, including the Ball Court, the Thousand Columns, the Temple of the Warriors, and more. Not included on this trip was an exploration of El Caracol. Afana regretted not being to explore the Venus-centric dome for a definitive answer.

“The buildings and structures were very Mayan,” Afana explains, “but it was hard to make the carvings. The stone was worn, ruins, so…” Afana shrugs. 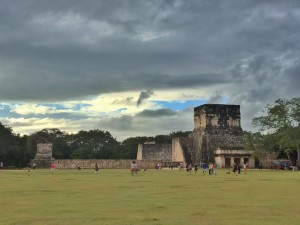 Truth…was not out there in Chichén Itzá.

Most people connect Chichén Itzá with aliens because of the astrological intricacies. If the Mayans looked so much to the heavens, then the truth must be out there, so says The X-Files. There are also reports of a light that shoots out from the center of El Castillo, whether it be a call to beings beyond our world or a death ray to be harnessed for world domination. In any case, Afana’s exploration of the sites provided no proof that aliens walk or walked among us, and other than a really cool shadow snake and an unhealthy obsession with the planet Venus (unless our new rulers are from the Morning Star), it appears this conspiracy theory is still just a theory.

Sarah John Afana is a graduate of the French Culinary Institute but chooses to spend her time exploring Mexico, the Caribbean, and other parts of the world for GOGO Vacations as a marketing specialist. She makes fantastic office treats and handles the company’s social media. She is also an accomplished artist, creator, and photographer.