Of course there are those born and bred Angelinos, but most people in this sunny Southern California city have flocked here from someplace else and were once tourists themselves! In the entertainment capital of the world, a lot of those, still out-of-towners at heart were eager to share these suggestions to newcomers at the must-see stops in the City of Angels. 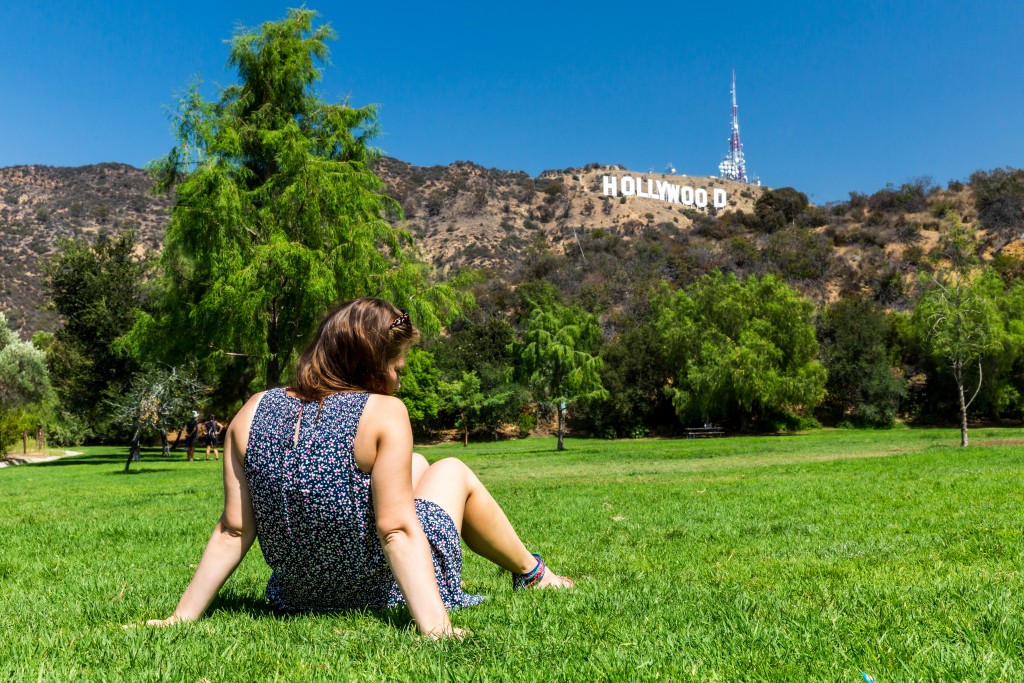 One of the most iconic symbols in the world, the sign in the Hollywood Hills first started as a real estate advertisement in 1923 and read “Hollywoodland” until the last four letters crumbled from decay. It was restored in 2010, and although it is illegal to hike near the sign, you can still get close enough to snap as many selfies as your heart desires.

You will certainly run into more than one resident hanging out to people-watch or jog along the crescent-shaped coastline. Nearby in Angels Gate Park, is the Fort MacArthur Military Museum and the huge pagoda and chime known as the Korean Friendship Bell—a gift from the South Korean government.

You’ve seen it on TV every New Year’s Day, and when there aren’t teams playing, there are concerts or flea markets here. Next door is the Kidspace Children’s Museum, plus lots and lots of turn of the century architecture that’s worth checking out.

Armand Hammer was a wealthy entrepreneur and art collector. This free museum is dedicated to the arts, and this summer, check out the “Made in L. A.” exhibit that will run from June 12 through August 28, which showcases the city’s creative style. Art classes, lectures, and film series are also among the offerings.

Some of the best (and weirdest) people watching in the world can be found along this famous Pacific Ocean front hotspot. You can never be quite sure what you are going to see, but it’s always filled with musicians and artists of every shape, size, and ability. 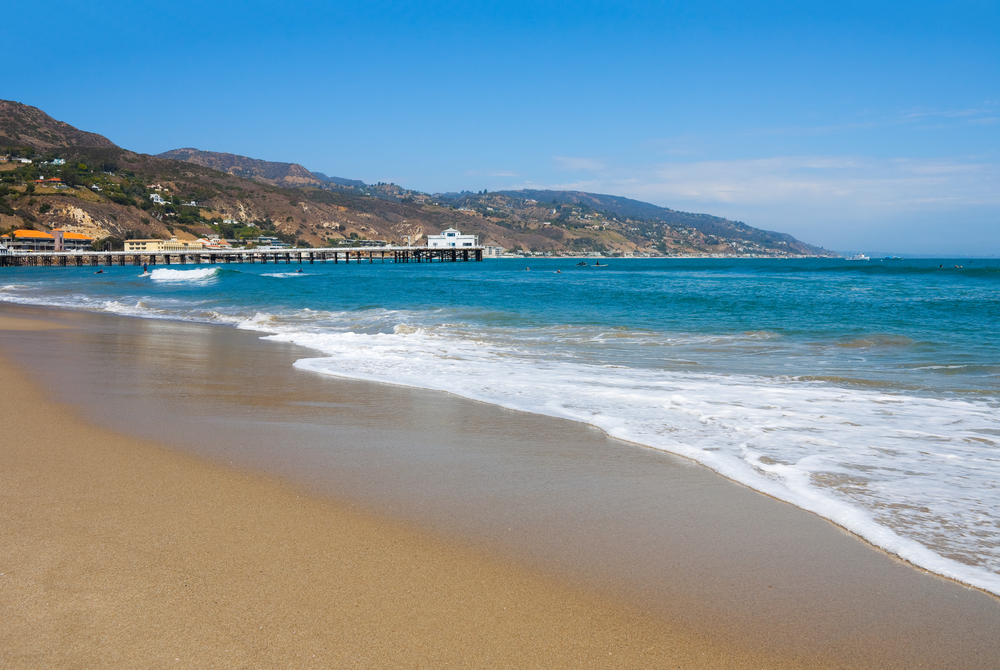 Southern California is synonymous with surfing, of course, and if you want to get a gander at some of the best in the business or try to catch a wave yourself, Surfrider Beach, also known as Malibu Lagoon State Beach, is a great place to hang 10 or just hang out.

The Frank Gehry-designed auditorium, which looks like waves of reflective steel, is worth the trip to see alone, but there are also many international performers as well as local favorites, like the Los Angeles Master Chorale, that regularly perform here because the acoustics are so good.

This famous home for all things art sits in a spot overlooking the city and often affords a clear view of the ocean when the smog lifts. Van Gogh’s Irises and Monet’s Wheatstacks are here, but there are gorgeous gardens and outdoor cafes that will please even the aesthetically challenged. 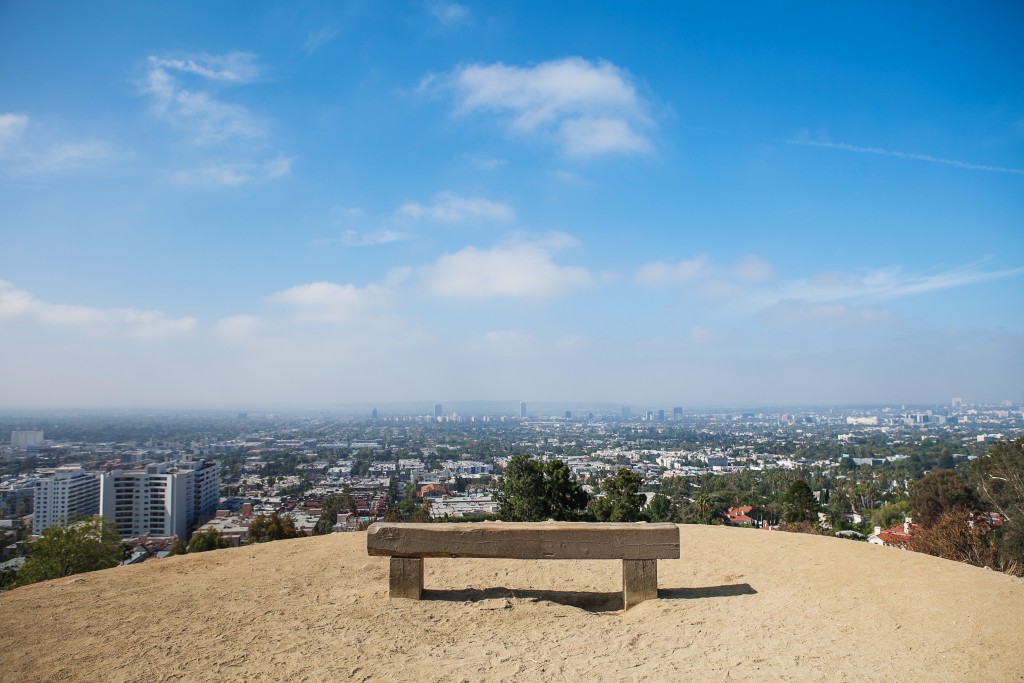 In the middle of the Hollywood Hills, there is a 130-acre park that is something of a mecca to exercise fanatics. While you are there, you may want to check out the remains of the Runyon estate called “The Pines” that was once developed by Frank Lloyd Wright and is said to be haunted—perhaps by the ghost of Errol Flynn. (Note: the trails are currently closed until August to fix a water main.)

A famous local landmark, this planetarium holds claim to the most advanced star projector in the world. It’s an amazing spot to visit after dark, too, with many telescopes set up on the lawn for additional stargazing. Movie buffs will also recognize it as the scene of the James Dean flick Rebel Without a Cause

Every since it opened in 1922, this concert venue has drawn some of the biggest names in the music business and is the summer home to the LA Philharmonic and the Hollywood Bowl Orchestra. Picnic in the park before the show. The easiest way to get there is with the inexpensive shuttle from Hollywood & Highland.

Rembrandt, Andy Warhol, and Ansel Adams are just a few of the famous names whose artwork graces the walls here, plus many other impressive collections from around the world. There is also a very cool Friday night jazz series, movie screenings, and other events definitely worth checking out. 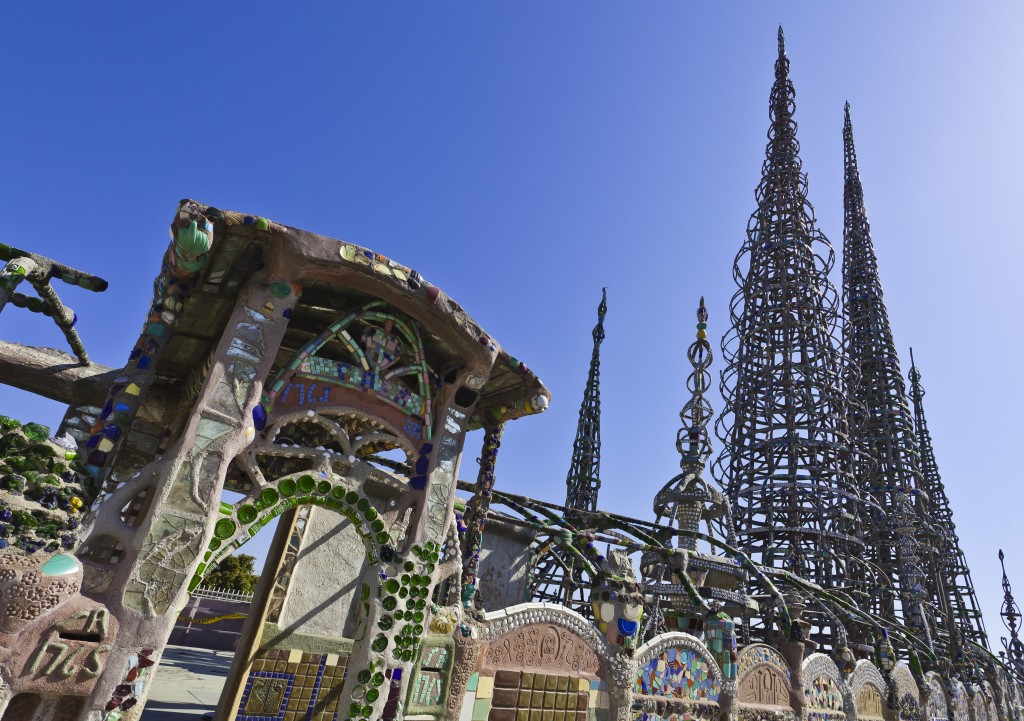 Italian immigrant Simon Rodia started on this sculpture in 1921 and worked on it for 33 years. It includes everything but the kitchen sink, from 7-Up bottles to seashells. There are often fun art classes held here, too.

Los Angeles is the home of the music business, so it’s no surprise that a museum dedicated to it would be here, too. There is a fun sound chamber where you can learn about remixing and even belt out a tune. See the iconic items on display, like Michael Jackson’s famous rhinestone glove.

Farmers’ markets have become ubiquitous these days, but this one started in 1934 and offers donuts and all kind of other assorted goodies in addition to fresh produce. In the summer it is also the site of a lot of fun concerts. 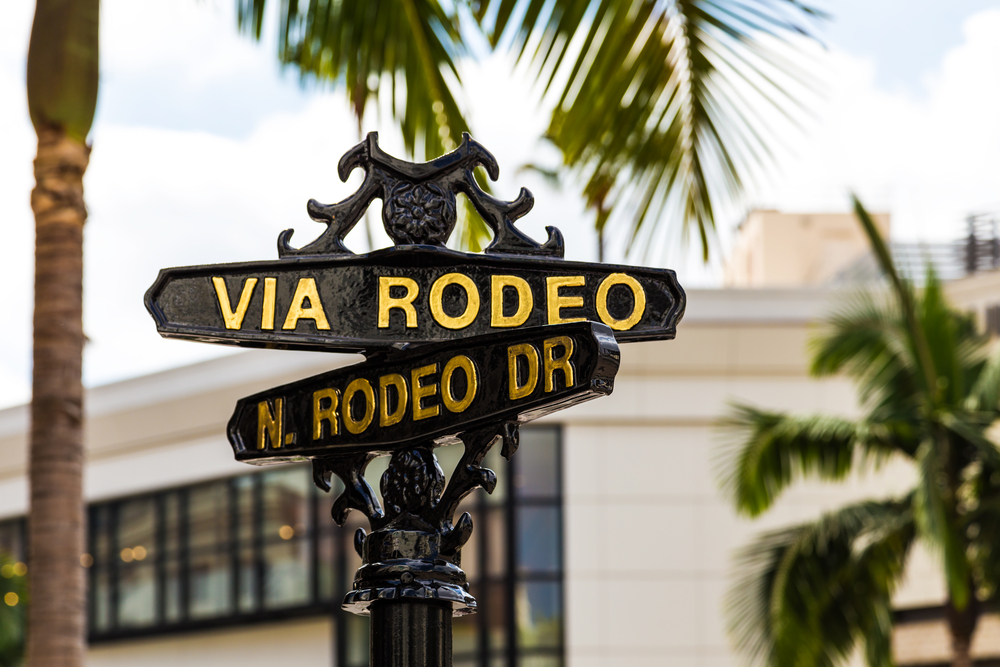 Two little words have never done so much for shopping. Of course all of the high end shops are worth exploring, and you can even follow in Julia Robert’s Pretty Woman footsteps. There is also a lovely cobblestone walkway where you can grab a bite while people watching.

You can’t visit the home of the film business without seeing a movie studio. Universal is the oldest in the country. You can get the combo of a studio tour with the fun of a cool amusement park at the same time here. Definitely hop aboard the 45-minute narrated Studio Tour. There are tons of rides including the super fun 3D Despicable Me Minion Mayhem and Harry Potter and the Forbidden Journey at the brand-new the Wizarding World of Harry Potter.

Take a trip back in time to the golden age of train travel with a grand room of Art Deco styled fixtures, wood beams, and marble tiles. This is still a major hub, and new high speed trains hint that it may soon return to its original glory. 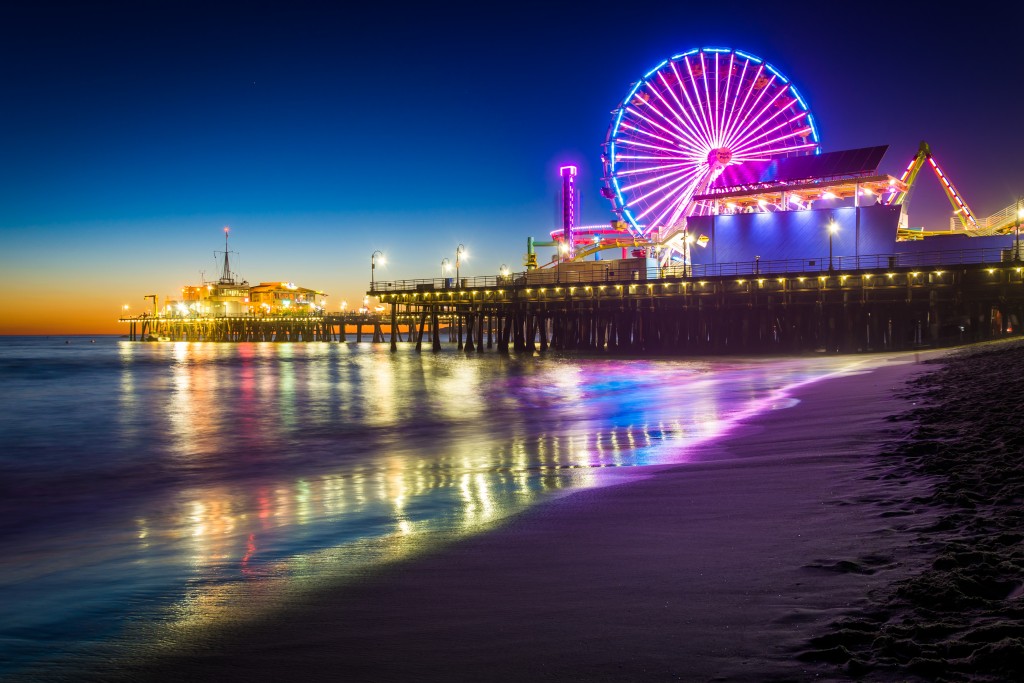 Santa Monica Pier has been a popular destination for fun since it opened in 1908 and includes arcades, a Ferris wheel, and a roller coaster all overlooking the Pacific Ocean. Don’t miss the aquarium or the famed Muscle Beach where the fitness obsessed come to work out and show off.

The beautiful San Gabriel Mountains surround this horseracing track that is the home of the Breeders’ Cup. This is where Seabiscuit, the legendary horse documented in the hit film, also called home during his celebrated career.

There’s so much to do and see here, including the space shuttle Endeavour, that it would be tough to see it all in one afternoon. Explore the human body in the World of Life, experience what it’s like to be in an earthquake in Creative World, and learn about space travel in the Sketch Foundation Gallery.

Aquarium of the Pacific

Set in Long Beach, this is a huge display of everything from sea otters to starfish. You can even pet a shark (it’s a baby shark but still a shark!) at Shark Lagoon, plus so much more in the facility that boasts more than 12,000 living inhabitants. 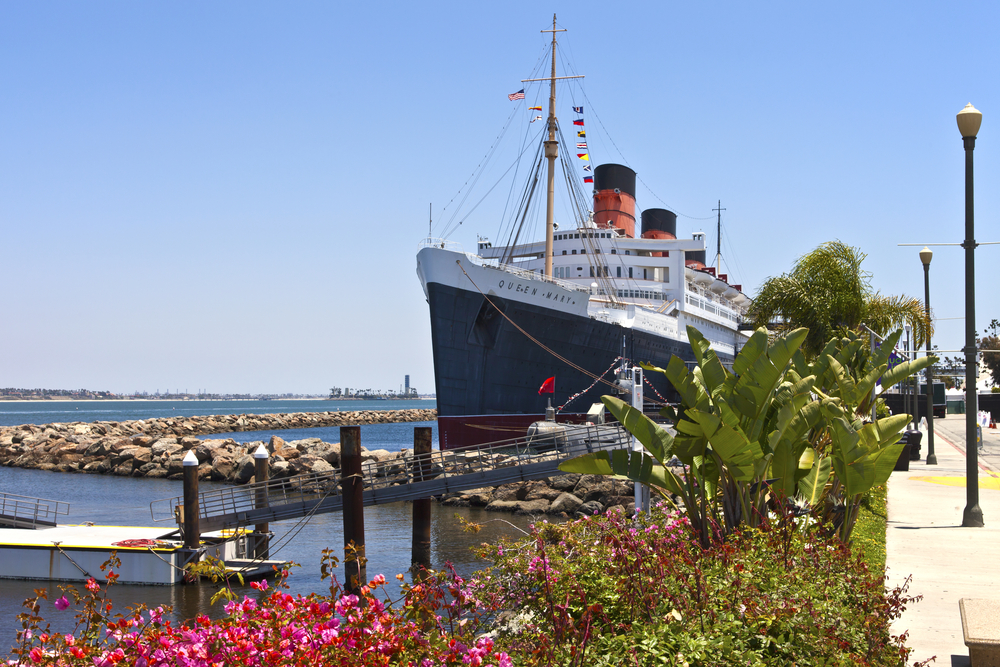 Is it haunted? That’s the question many visitors to this Long Beach landmark ask themselves. The luxury liner sailed from 1936 until 1964 and much like the Titanic, hosted elegant ladies and gentlemen in its Grand Salon that is still on display. It’s said that there are still a few ghosts from that era floating around, and during one tour called Ghosts & Legends, you may even see a few.

If you don’t know who Will Rogers was, google him. The Oklahoma cowboy turned humorist was once the highest paid actor in the 1920s/30s. He lived here on a ranch until the end of his life, and in addition to being able to hike the many trails, you can visit the home and see an array of western and Native American art as well as a porch swing right in the middle of the house.

Los Angeles’ warm climate is the perfect setting for year round blooming of tropical plants and cacti. There is a beautiful Japanese garden, too, that is a must-see attraction. When you visit, also be sure to check out the Huntington Library and art collections, too. 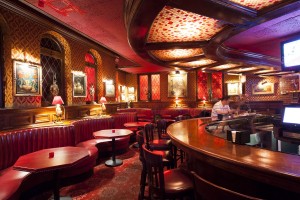 Like many places in Los Angeles, a movie was shot here. Jack Nicolson and Faye Dunaway filmed scenes for Chinatown here in this Koreatown favorite. This dark hideaway opened in the 1920s, looks like part of a movie set, and features some of the best fried chicken around.

Keep your eyes peeled for celebrities when you aren’t busy starring at the butterflies all over the ceiling. Gastropub food includes excellent burgers and fried chicken, and there’s a nice outdoor patio and the place to be seen in West Hollywood. The famous Chateau Marmont is right next door.

Related: What’s Happening in Vegas No Longer Stays in Vegas 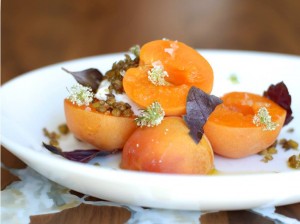 This Studio City gem is a must for vegetarians and vegans. The menu is varied and interesting. Try the hand rolled pasta, blacked cauliflower, or the roasted garlic and thyme popcorn. Yum!

If you are searching for a fine dining spot, look no further than celeb chef CJ Jacobson’s hotspot where the fried red snapper has crowds wowed.

Head to Nobu Malibu for the best sushi you will ever taste with an incredible view of the Pacific and its coastline. It’s not cheap but definitely worth it. 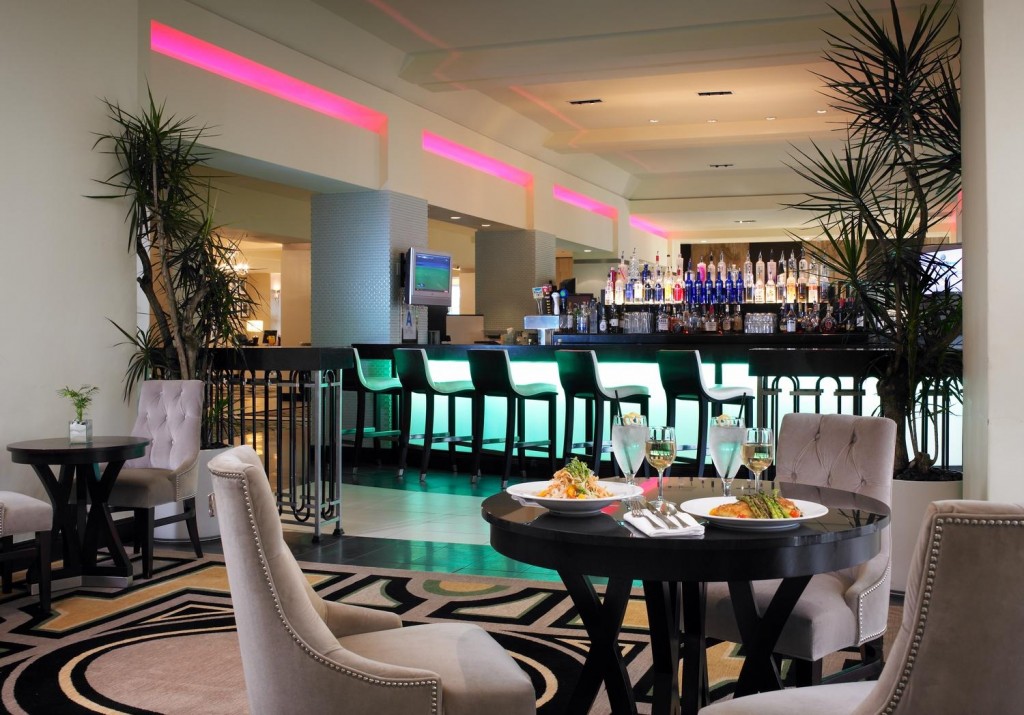 A favorite of celebrities, this is the only on-site property in Universal City. The pool is brand new, and there is a free trolley that takes you right up to the gates of the park. Pardon their Floo Powder as they begin modernize the rooms this summer and update the lobby and pool this fall. 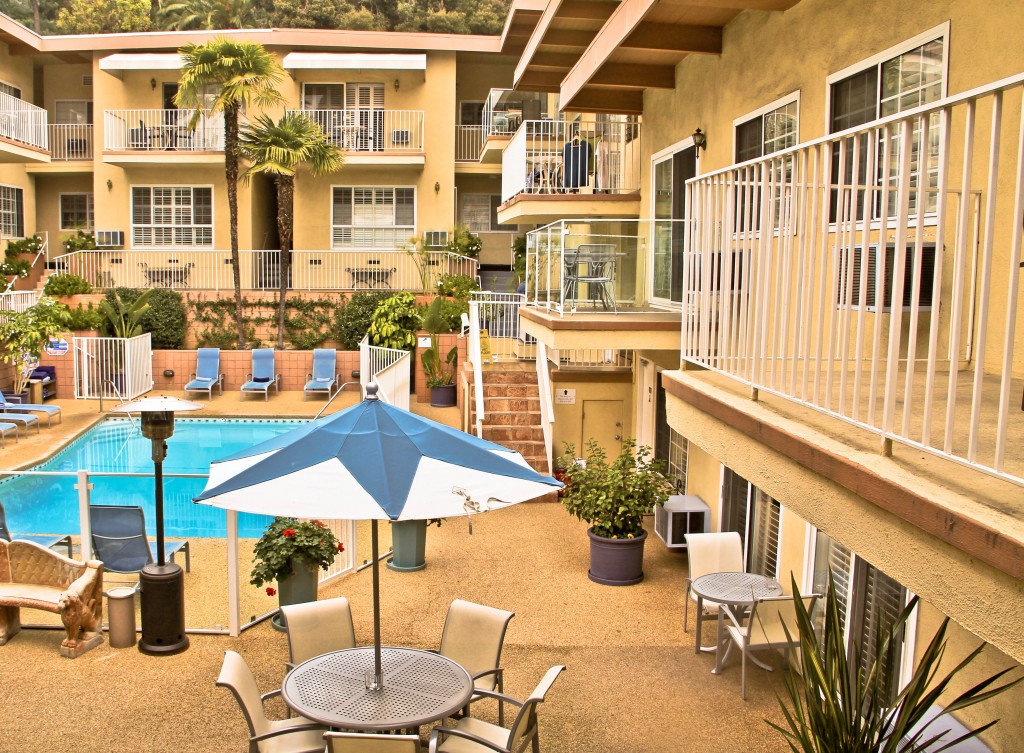 One of the coolest offerings at this hotel is the “Popsicle Hotline” which will bring the sweet treat of your choice to the pool on a silver platter, and don’t miss out on the unlimited snacks, available around the clock. There is also a free continental breakfast, free laundry service, and apartment-like accommodations. 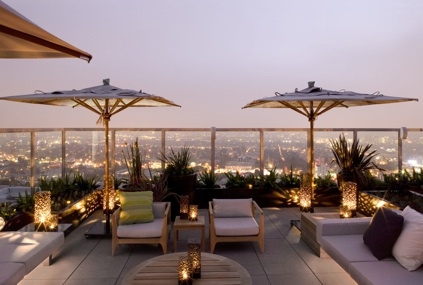 This lovely hotel situated right on the famed Sunset Strip in West Hollywood features rotating art exhibits, a sun porch or indoor balcony in many of the rooms, a cool rooftop bar (where a scene from Spinal Tap was filmed) and a great pool. It was a favorite of 1970’s rock stars back in the day, who nicknamed it the “Riot Hyatt.”