On the Go Extra: Away We Go with Location Manager Joshua Shull!

I do like to relax, but I do have a lot planned when I do go on vacation. 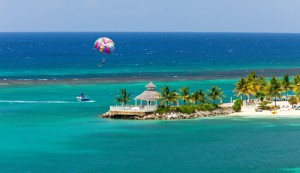 Best vacation you’ve ever had?

My first trip to Jamaica was pretty great with Ochos Rios, and I swam with the dolphins. I love to scuba dive. It’s such a beautiful country, exotic fruits and foods.  I had a great time in Tuscany, in Italy, at a vineyard and restaurants. Those are probably my two favorite places: Tuscany and Jamaica.

I always wanted to go to Brazil. I think that would be fun.

I stayed in a great hotel in San Francisco, The Fairmont. I’m a big fan of the Plaza in New York, but that’s not exciting because I live in New York. (laughs)

Are you a fan because you stayed there or filmed there?

I have stayed and filmed there a few times, but you see it in the movies when you’re a kid. It’s such a stately, grand hotel right on Fifth Avenue near Central Park.

I stay in a lot of bed and breakfasts honestly. Maybe that’s why I can’t think of my favorite hotel. I generally look for small, intimate, charming mom and pop places. 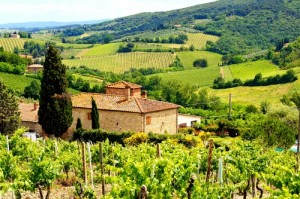 Do you have a favorite bed and breakfast?

I found a Tuscan Villa online a couple summers ago when I went to Tuscany – Villa di Sotto. The name of the town was Castelnuovo Berardenga. It had seven simple bedrooms, and it was simply an 85-year-old Italian couple’s house in Tuscany on a vineyard. [The wife] would make breakfast every morning, and if you arranged it in the morning, she’d cook dinner in the evening. She’d literally pick artichokes from her garden and carry them in, in a basket. Her husband would shoot a rabbit, and she’d cook you rabbit and the creamiest artichoke risotto on earth. I ate at her house nearly every night for a week because she was such an incredible cook. She spoke zero English, but was a very sweet woman.

One of my dream destinations is Italy.

Oh, yeah. Have you been?

No, not yet. Hopefully soon.

Oh, you should go. It’s broken up into regions, and their food and their wine is completely specific to each region. There’re cheeses from each of those regions that you’ve never even tasted before, and it’s specific to that mountain or that farm, and that’s why it tastes that particular way. You’ll gain forty pounds. I definitely want to go to Sicily, too. That’s one of my next trips.

There was one in Rome.  It was right by the Colosseum – but not touristy at all. It was a tiny little place – a friend here in New York recommended it. Il Tempio di Iside, the address is: Via Pietro Verri 11. When you walk in—they literary were delivering the fish from the ocean, and they were still flopping around on the ice in the Styrofoam boxes, so when you walked in, the first thing we saw were a dozen, two by two foot cubes of Styrofoam that had fish flopping around in ice. It’s really small place. The husband and wife owners came to our table, and the wife, Rosely, said, in her strong accent, “I don’t speak English very well, but I speak with my food — do you trust me?’

They said, “All right!” And they started sending out food, and they sent out about seven courses.  It was the freshest, most delicious seafood – just insane

When I go to Jamaica and Puerto Rico, I usually drink rum. I’m a rum punch kinda guy.

I love fishing and scuba diving.

Have you ever gone deep-sea fishing?

I have in Florida. Yeah. It’s awesome. I actually have a four-foot yellow amber jack mounted on my wall that my brother and I caught. I grew up in Michigan, and we did a lot of fishing growing up on Lake Michigan, catching 30-40 pound salmon. And even on the small lakes in Michigan, we’d fish a lot. My wife likes to fish, too, so we tend to make that at least one day of our vacation.

I’m a hippie. I love to go barefoot.

We know you worked on What Happens in Vegas, so does what happen in Vegas stay in Vegas?

Read Joshua’s interview in On the Go, and see our amazing New York deals at GOGO Vacations!