The busiest travel holiday of the summer, America celebrates its independence with patriotic passion across all 50 states. While towns hold barbecues and carnivals to celebrate the Fourth of July, cities host events of grandeur—free concerts with celebrity acts, eating contests, street-closing parties, and historic activities, all culminating with a ravishing recreation of “rockets’ red glare” to honor the birth of our nation. From battlefields where the Revolutionary War comes alive to the streets where citizens celebrate, check out America’s best birthday bashes. 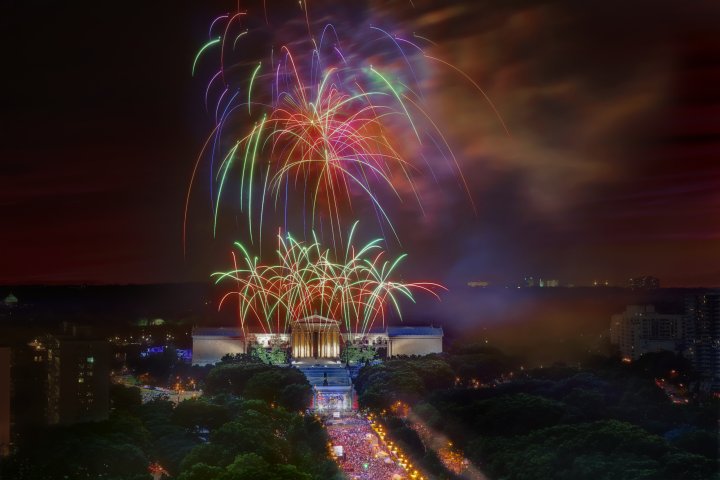 No city parties like the birthplace of America’s independence, and the festivities begin as early as June 27 and end as late as July 8 with “Wawa Welcomes America!” events. During this week-and-a-half celebration, Philly offers majestic ships and a six-story rubber duck in the harbor; free concerts by the United States Army Band “Pershing’s Own” and the Philadelphia Orchestra; free admission to the Franklin Institute, the Philadelphia History Museum, the African American Museum, and the National Constitution Center; a free street festival; and multiple chances for fireworks shows.

On the Fourth, the Independence Day Parade in Historic Philadelphia features more than 6,000 participants from around the country. The Party on the Parkway closes Benjamin Franklin Parkway from 20th Street to Eakins Ovals and invites guests to enjoy American freedom with food vendors, live entertainment, interactive fun and more! At night, the streets dance with the Philly 4th of July Jam Concert and Grand Finale Fireworks. Celebrity musical talents perform in the “largest free concert in America” before a dazzling fireworks display illuminates the sky over the Philadelphia Museum of Art. Guests who wish not to venture into the excitement of the Benjamin Franklin Parkway can also see the stunning celebration from a variety of venues in the city, including hotels and neighboring parks. The event even has its own Twitter feed (@July4thPhilly) for updates and event information. 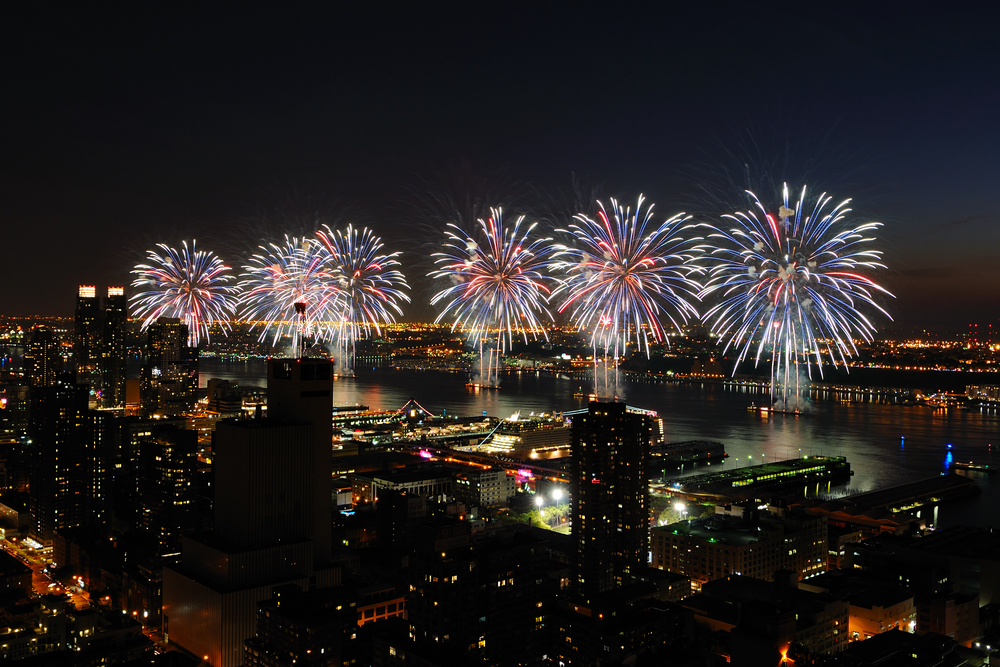 Perhaps the best known July 4th celebration, New York boasts the iconic Macy’s Fourth of July Fireworks over the Hudson River which offers star-spangled patrons a concert series with well-known musical talent and evening sparkling sky candy. Viewers can watch the fireworks from a variety of venues, from top of the Empire State Building with light refreshments to the deck of a Circle Line Cruise with a live DJ and food. The Sheraton Lincoln Harbor Hotel and the Hudson Hotel offer great views from their rooms and rooftop parties. Just a subway ride away, approximately 40,000 fans watch in person and another million via TV as 24 willing participants devour incredible numbers of frankfurters in the Nathan’s Famous Fourth of July International Hog Dog Eating Contest. And don’t miss out on the Red, White, and Brew Pub Crawl in the East Village.

As the birthplace of America’s revolution, Boston celebrates the Fourth of July like no other city with a five-day Harborfest. Join organizations such as the USS Constitution Museum, the New England Aquarium, and Historic New England to educate, inspire, and honor America’s birthday with more than 200 daily events that include a scavenger hunt with a Boston Tea Party theme, a walking tour on the Freedom Trail, and even an all-day Chowderfest. Take a break from the festivities to have a picnic lunch on the Roseway or watch the USS Constitution performs its annual turnaround. At night on the Fourth, the sky explodes in a fury of delight with the Boston Pops Firework Spectacular. Held at the DCR Hatch Shell on the Esplanade, the spectacular has two secured areas in which to celebrate with food vendors, two large video screens, and a multitude of sound towers to optimize the experience.

Also known as “The Revolutionary City,” Williamsburg puts on a July Fourth celebration worthy of the Founding Fathers. The fun-filled day begins with a Salute to the States behind the Courthouse to honor the original 13 colonies and the current 50 states, a special performance by the fifes and drums and the roar of authentic Revolutionary War cannons. Then a dramatic reading of The Declaration of Independence resonates from the Courthouse steps and in the heart of every American present. The Kimball Theatre presents two showings of the American musical 1776, which shows the days leading up to July 4, 1776 and the signing of The Declaration (This might just be my favorite movie of all time). In the evening, Illuminations of Market Square and Palace Green showcase the various sites and buildings in the town and explain their historical significance, while A Salute to the Nation gives special tribute to the Armed Forces. The day culminates with an exciting fireworks spectacular. 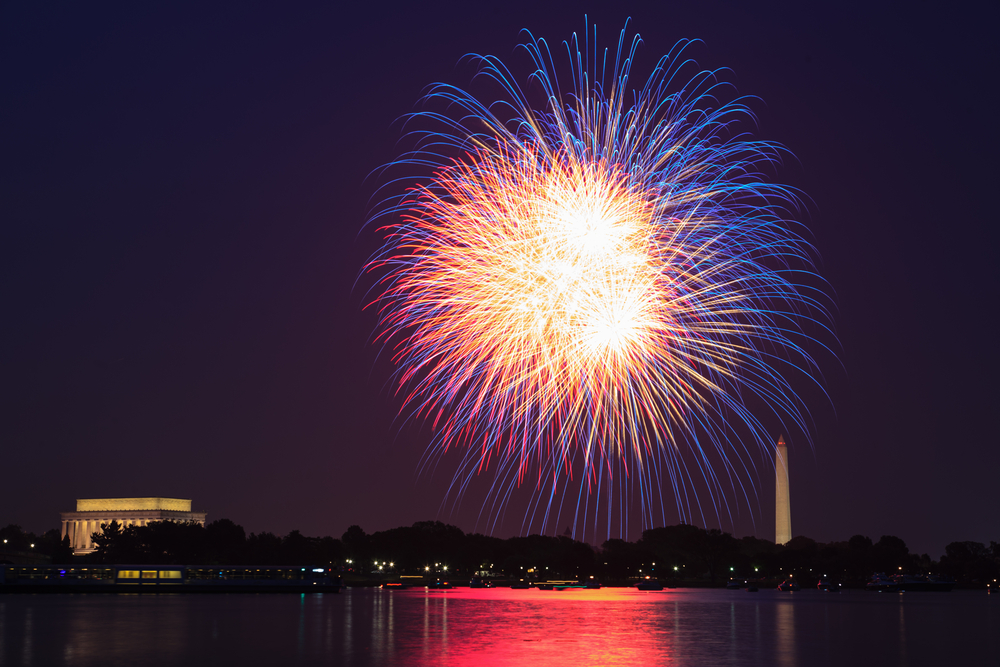 The nation’s capital delivers one of America’s most patriotic birthday celebrations. The National Independence Day Parade kicks off on Constitution Avenue with an enthralling performance of fife and drum corps, military and specialty units, drill teams, national dignitaries, celebrity participants, and nearly a marching band from every state. The home of the original Declaration of Independence, the National Archives, offers family-friendly activities, including visits from Thomas Jefferson, Benjamin Franklin, and other historical figures. “A Capitol Fourth” concert on the U.S. Capitol’s West Lawn delights visitors with a free, 90-minute musical experience. Later, a sparkling display of fireworks amaze 500,000 visitors, set to the soundtrack of the National Symphony Orchestra with the backdrop of the National Mall. Over the last weekend of June and the first week of July, the Smithsonian Folklife Festival is a living cultural heritage exposition and takes place just north of the National Museum of American Indians. 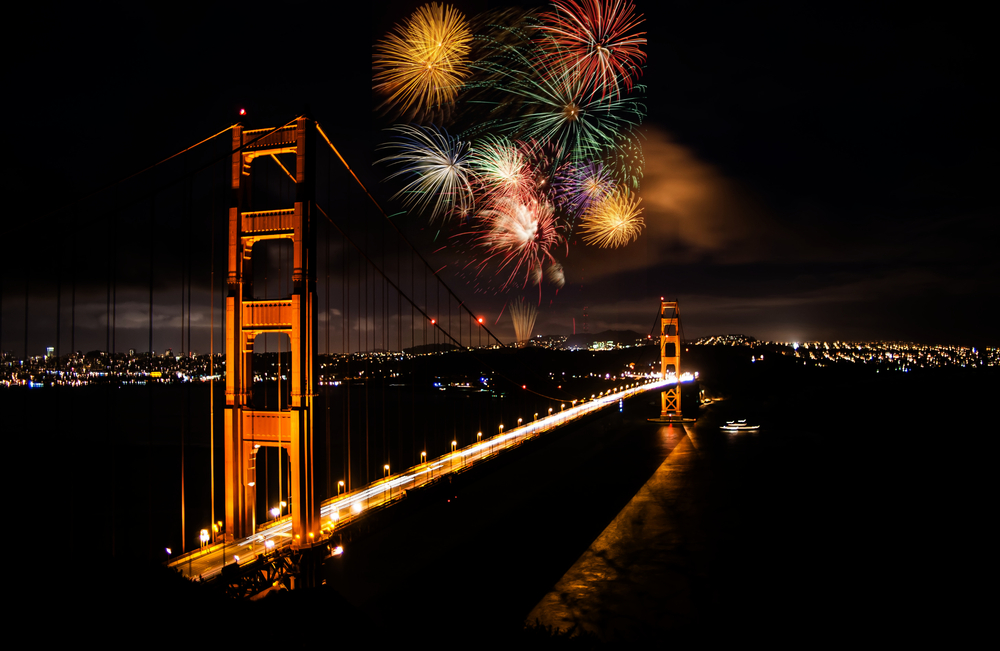 San Francisco celebrates America’s birthday with patriotic parties and epic events for all tastes. Starting at noon, the July 4th Celebration at the Pier (39) offers live entertainment, drinks, and even a play area for the children, and at night, party-goers can enjoy two firework displays—one set fired off at the end of Pier 39 and one set fired off from the end of Municipal Pier. If you want to enjoy yourself a little out of the city, The Fourth of July Fireworks from Angel Island State Park has a cantina with delicious offerings and live music before a tram ushers visitors to Battery Ledyard, the best viewing area for the fireworks with panoramic views of San Francisco, Marin County, and the East Bay. Cruises are also available to give viewers a front-row seat to the impressive tapestry of patriotic pride in San Francisco Bay. Other special events include a live 80’s music concert at Aquatic Park, a July 4th concert with the San Francisco Symphony, and a National Park Service free walking tour of Fisherman’s Wharf.

Music City knows how to throw a party for the Old Red, White and Blue, and according to the Nashville Convention and Tourism Corp., the annual Music City July 4th: Let Freedom Sing! festival will host the nation’s largest firework spectacular with more firework shells than any other show. But the festival is more than just the fireworks. Early in the morning, Nashville hosts a 5k/10k run that benefits the Salvation Army before “Let Freedom Sing!” belts out free concerts on The Lawn at Riverfront Park. With award-winning musical acts like Mikky Ekko, Martina McBride, The Weeks, and the Nashville Symphony, this is a party not to miss! The Music City Hot Chicken Festival welcomes hot chicken joints from around the Nashville area on the 4th to showcase the best recipes while amateur chefs grill it out for the title of festival champion!  A zip-line strung over 2nd Avenue thrills riders with a bird’s eye view of the city and the festival, and while children enjoy the free McDonald’s Family Fun Zone with climbing walls, water slides, samples, and games, adults can relax at the Beer Garden or Jack Daniel’s Experience. At the end of the night, more than 35,000 firework sells will set the sky ablaze over the Woodland Street Bridge!

Named one of the top five firework shows in the U.S. by The Wall Street Journal, USA Today, and American Pyrotechnic Association, Addison Kaboom Town! offers fly-bys from World Class Warbirds from the Cavanaugh Flight Museum, food, games, entertainment, and an after party at Addison Circle Park. Oh, and more than 1,500 pounds of fireworks with a breathtaking display choreographed to patriotic music. Unlike most Fourth of July parties, this bash takes place on July 3rd, starting at 5 p.m., and draws more than 400,000 visitors.

Back for its 29th year, the Southwest Airlines Freedom over Texas celebration begins at 4 p.m. at Eleanor Tinsley Park on Buffalo Bayou, and mixes fireworks with country tunes and family-friendly activities. This year headliners include Houston’s son Clint Black and singer-songwriter Josh Turner, and for children, the Wal-Mart All-American Kids Zone provides face painting, henna tattoo artists, strolling entertainment, clowns, magicians, and more. Adults will love the Bud Light Lime-A-Rita Beach Bash with the All American Beer Garden and BUD girls. The Dr. Pepper One of a Kind Zone will include activities and meet-and-green opportunity with Houston’s professional sports teams, plus a salute to all five branches of the military. Finally, the night ends with the CITGO Fueling Good Zone and Fireworks Finale. 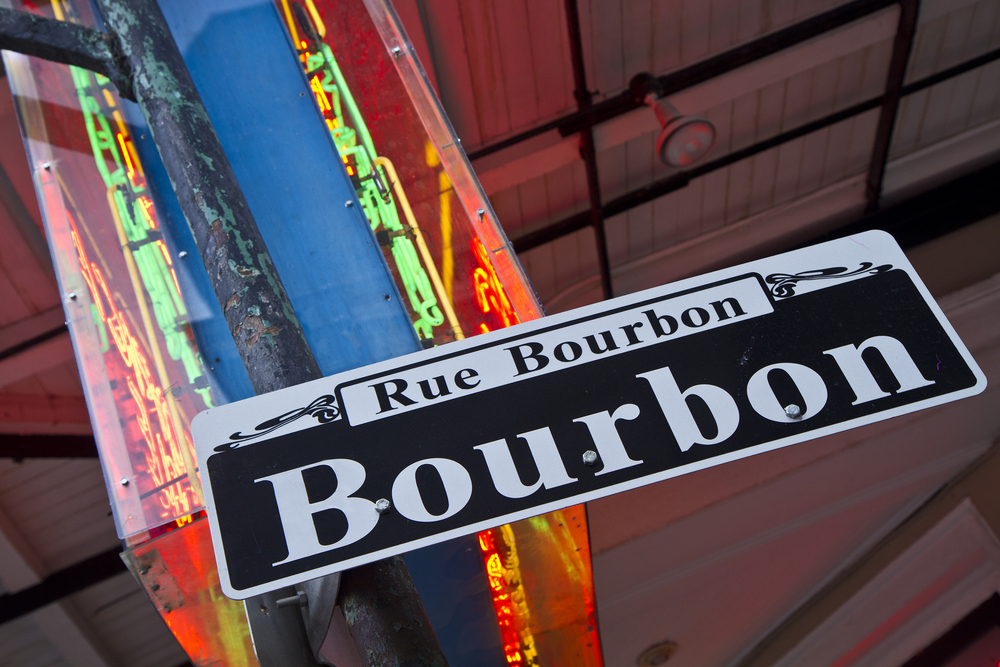 If any place knows how to celebrate, it’s the French Quarter. Another top five fireworks spectacular by the American Pyrotechnics Association, the Fourth of July fireworks over the Mississippi River offer more than just the usual colorful show. Last year’s celebration featured nautical floating shells that created a glittery fountain of sparks, so look for more creative displays this year. Great views can be found on either side of the river or on the Canal Street Ferry. Another great point—and specific to New Orleans—is the levee in Algiers Point. If you’re looking for some southern hospitality, take one of the two operating riverboat paddlewheelers, Natchez and Creole Queen, for some dinner and live entertainment for the fireworks begin.

Got a favorite birthday bash? Let us know in the comments!

2 thoughts on “Top 10 Fourth of July Celebrations Across the U.S.”