There’s paradise, and there’s Hawai`i, the quintessential paradise. A collection of eight islands, the Aloha State has been welcoming honeymooners and families alike for years with its unique attractions, from natural wonders like spectacular volcanoes and beautiful waterfalls to quaint towns and local farmers’ markets. Travel Guru Ashley Colburn visits the four main islands—Hawai`i, Maui, O`ahu, and Kaua`i—in the latest webisode of Paradise Found!

Ashley starts her journey on the largest island, also referred to as The Big Island, Hawai`i Island. One of the island’s main attractions is Hawai`i Volcanoes National Park with its active eruptions and lava tube explorations. The park itself is more than 333,000 acres with Kilauea and Mauna Loa, two of the world’s most active volcanoes.

Jessica Ferracane of Hawai`i Volcanoes National Park explains, “Kilauea has been erupting for hundreds of thousands of years, but this eruption that you see right now just started in 2008.”

The eruption is too far deep in the crater to see during the daytime, “but at night, that lava lake is going to cast a reflective glow on that night sky and on the plume [of steam] that will knock your socks off.”

Don’t miss an exploration of Nakuku or Thurston Lava Tube and the Kilauea’s eruption time lapse at 2:10. 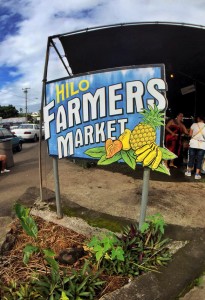 The main town on the Big Island is Hilo, which Ashley visited with Ross Birch, Executive Director Big Island Visitors Bureau. One of the town’s best features is the Hilo Farmers’ Market, which offers prime local produce and other food items.

“Any flavor you wish for, it’s right here,” says Ross. “Majority of vendors come in twice a week—mid-week on Wednesdays and then on the weekend, on Saturdays.”

Find out how to tell when the pineapple is ripe from Ross at 3:58!

From the market, Ashley drives the Road to Kona to the black volcano rock beaches and meets with Lily Dudoit, Cultural Activities Director, Sheraton Kona Resort & Spa at Keauhou Bay. Lily sings an authentic Hawaiian chant and teaches Ashley about the historic sites of the area, before Ashley enjoys a speedboat ride with Captain Zodiac.

Emphasizes Ashley, “The sea life in and around Kona is abundant, and within seconds of departing on an adventure on the water, dolphins were surrounding the boat, giving us a great show.” 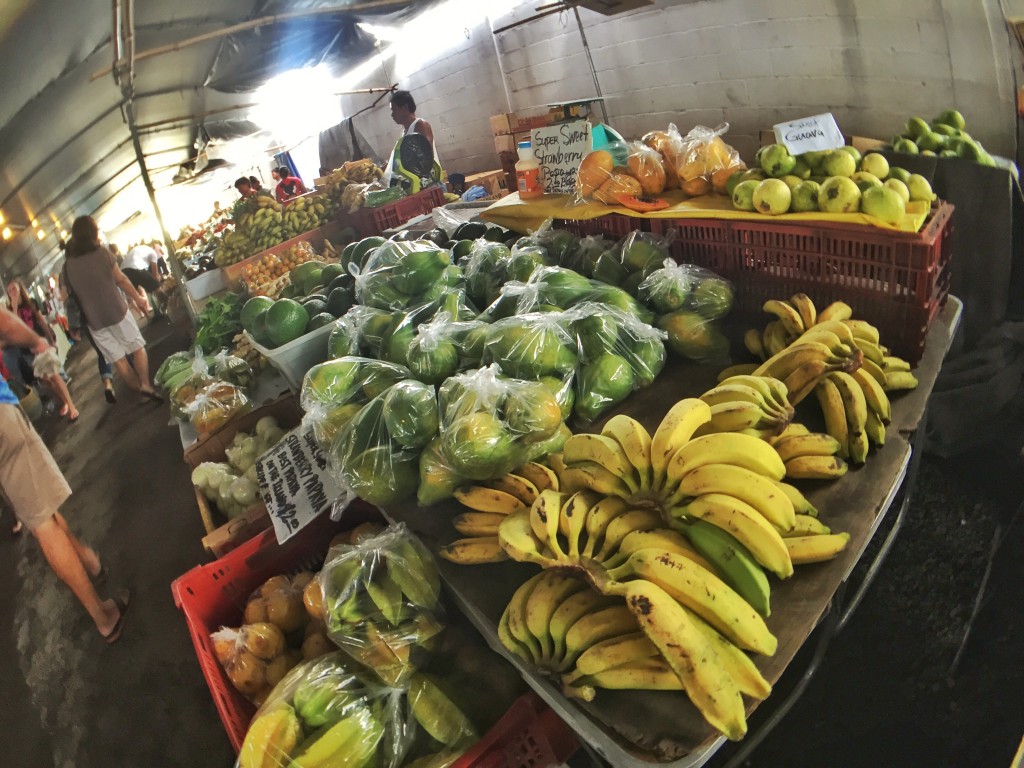 Ashley finishes her adventure on the Big Island with a Hawaii Forest & Trail excursion with Jason Chon, marketing manager of Hawai`i Forest & Trail. They see stunning waterfalls, ancient Hawaiian agricultural sites, and wild orchids on their off-road and hiking journey.

Next on Ashley’s journey is a stop at the second largest island, Maui. According to Kainoa Horcajo, Hawaiian Cultural Ambassador, Grand Wailea, “Life in Maui is the perfect blend of everything.”

One of the most breathtaking sights happens at the summit of Haleakala with spectacular sunrises and sunsets, but the island is also known for Iao Valley State Park and Kepaniwai Heritage Village.

Explains Ashley, “Heritage Garden is worth a visit to see why the Hawaiian Islands are referred to as the ‘Melting Pot of the Pacific.’”

The village has houses representing many of the ethnicities of the plantation workers who came to the island, including a Filipino house, a Chinese house, a Japanese house, and a Korean temple.

The blending of cultures is still seen today in the food of Maui, explains Chef/Owner Kyle Kawakami of Maui Fresh Streatery.

“It started off very early on with people from different cultures working on the same plantation field, and they would come together during their lunch breaks with their lunch tins, and each would bring their various cultural dishes to table. And they’d try each other food and take with them flavors, cooking methods, and go back home.”

Also on the island is the art and shopping district of Lahaina, on Front Street.

Says Kainoa, “Lahaina is one of the chiefly centers of the island. It was the capital of the Hawaiian kingdom for a time.”

From Lahaina, Ashley takes an excursion to the clear waters of Hanolua Bay and Mokuleia Bay with the award-winning Trilogy Excursions.

Points out Ashley, “Once I stepped on the boat, the service was pristine. The crew prepared homemade cinnamon rolls and coffee before our first swim spot.”

Ashley’s next stop is the most populated island and the island with the state capital, Honolulu. “In downtown Honolulu, in the heart of the Islands, we have our beautiful palace, the only royal palace on American soil,” says Kimoke`o Aya, Tour Guide for Diamond Head Vacations. “We also have the number one tourist site, Pearl Harbor. That takes you back to the morning of Dec. 7, 1941.”

Ashley visits the World War II Valor in the Pacific National Monument and calls it “an emotional walk through the past.”

In the evening, Ashley takes a trip to Paradise Cove because “a trip to Hawai`i is not complete without a luau.” 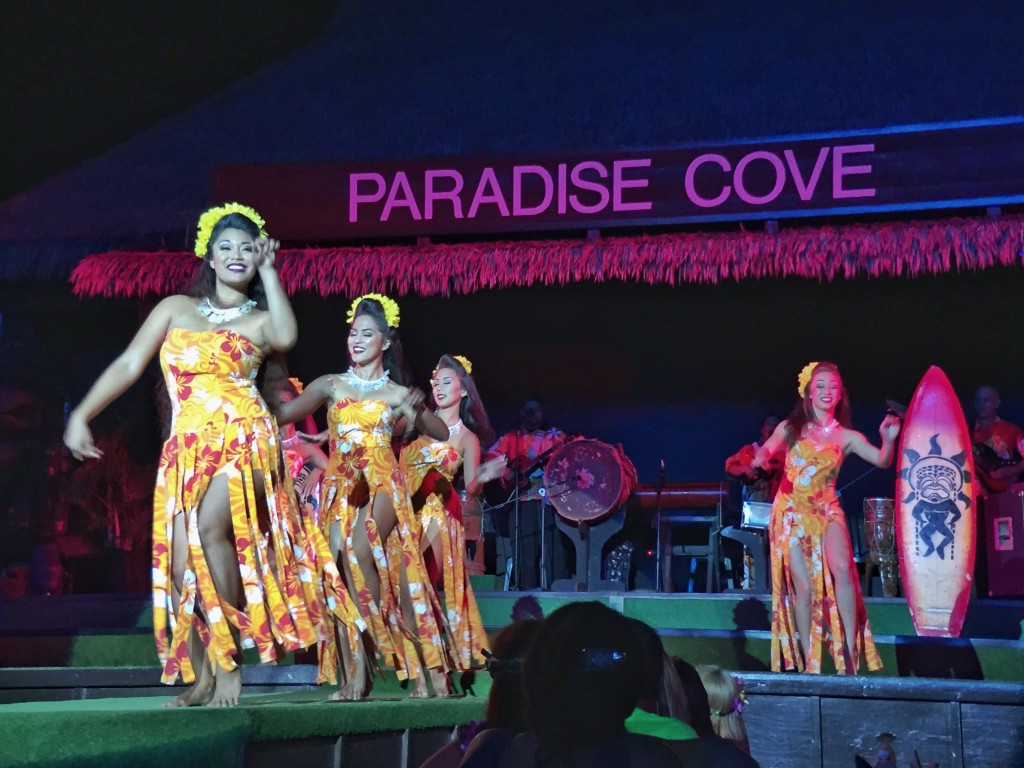 Says Keaweluaole Kamealona of Paradise Cove, “Hulu is basically a tradition. You’re telling a story in everything that you dance. It is based on when royalty came, that was our entertainment for them.”

But Paradise Cove is more than a show with fun activities like spear throwing, and arts and crafts like making bracelets, anklets, and more.

Guests enjoy a buffet of salad, fried chicken, rice, plus the traditional underground roasted pig before the show begins. Guests can also go up on stage and be taught hulu from the dancers, like Ashley did at 17:35.

Ashley finishes her whirl-island tour of Hawai`i on Kaua`i, the oldest island in the Hawaiian chain and the most northern. She meets with Sue Kanoho, Executive Director of Kaua`i Visitors Bureau, to learn about the unique adventures on Kaua`i.

“We’re known for our Nā Pali Coast,” says Sue. “It’s really spectacular…and of course, Waimea Valley, which is nicknamed the ‘Grand Canyon of the Pacific’.”

Adds Ashley, “This island is a good place to rejuvenate but also have some adventure.” 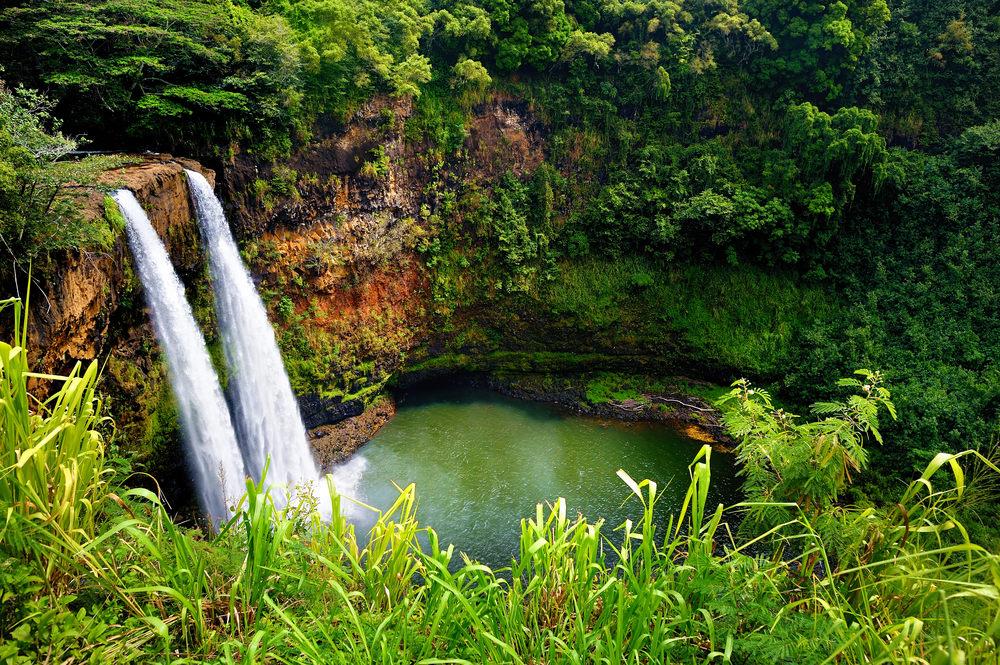 “Alleraton Garden was once a private estate and is set up in what we call ‘Garden Rooms,’” notes Tessa. “Each room is filled with tropical plants and flowers, water features, statues from around the world. It’s a really incredible place to come take a tour.”

The last stop on Ashley’s adventure is the Waimea Canyon Lookout, where Blake Brown, Outfitters Kauai`i Guide, explains, “Waimea Canyon was born about 4.1 million years ago. A magma chamber collapsed, a kind of architectural failure within the island. It created a fissure and eroded away, and this is what you get out of that.”

Ashley finished her adventure with a bike ride down the canyon. “Mahalo, Hawai`i. I can’t wait to see you again!”