A rich, cultural mecca, Vancouver enjoyed the World’s Stage in 2010 during the XXI Winter Olympics and continues to lure tourists with its diverse activities, picturesque sights, tasty offerings, and ultra clean streets. Check out these incredible sights and tours that are nothing short of Very Vancouver. 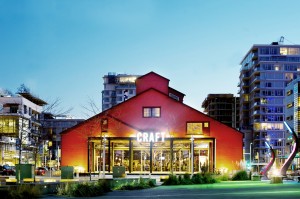 Vancouver welcomes connoisseurs of wines, beer, and other alcoholic drinks with its recent boom in brewing and distilling. More than 11 new craft breweries have opened since 2012 and as many as 40 brewhouses will be producing a variety of drinks by the end of 2014. Distilleries are also on the rise and craft local gin, vodka, whisky, sake, and more. Liberty Distillery, the latest to open, focuses on “authentic and true artisanal premium spirits from 100-percent B.C. grain.” Downtown, the Vancouver Urban Winery occupies a 7,700 square-foot building in Railtown and offers visitors 30 British Columbia-made wines, including two wines crafted on site. Taste-testing and food-pairings make this a must-see attraction for any wino.

Vancouver beautifies its landscape by welcoming the 2014-2016 Biennale. Now in its third installment, this giant, outdoor art exhibit displays massive works of public art throughout Vancouver and draws well-known artists, including Ai Weiwei who was a creative consultant on the Beijing National Stadium for the 2008 Olympics. From 2014 to 2016, more than 30 sculptures will decorate Metro Vancouver and the surrounding municipalities with 92 international artists and 12 Canadian artists participating. Many of the sculptures become permanent fixtures in the city, like A-maze-ing Laughter (giant bronze men near English Bay) and Engagement (huge engagement rings above Sunset Beach). 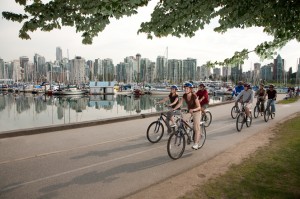 Don’t just visit Vancouver. Experience it with amazing walking and cycling tours. For those aforementioned winos, the Vancouver Brewery Tours offers private, three-hour tours with groups up to 12 and showcases up to three breweries per tour. These tours include transportation to each brewery, behind-the-scene tours, introduction to the brewing process, craft beer samples at each stop, and a souvenir pint glass. Other tours include Vancouver Photowalks, which is a two-hour tour about photography and Chinatown, Granville Island, Kitsilano, and Olympic Village; Off the Eaten Track Tour, a walking tour along the unique Main Street with tastings at five locales; and Forbidden Vancouver-Granville Street Revival, which highlights the once illegal speakeasies, the vibrant vaudeville theatre scene, and the notorious adult entertainment hotspots.

Check out all the wonderful sights at #VeryVancouver and make your own memories with GOGO Vacations.