Her Royal Touch: Carolyn Robb in Scotland, England, Dubai, and Around the World

When you’ve cooked for Their Royal Highnesses (TRH) Prince Charles and Princess Diana, you could say you have a “royal touch,” which Carolyn Robb certainly does. She worked more than 13 years for the British royalty, first with TRH The Duke and Duchess of Gloucester and then for TRH the Prince and Princess of Wales before taking her expertise to Dubai where she became a project director at the Chef’s Larder, helping to bring European projects to the emerging city. She’s also been a consultant with “seven-star” hotels, a food editor, a connoisseur of cupcakes, a cookbook writer, and a mother of two. Now, she’s adding “guest host” to her growing list of achievements with Back-Roads Touring’s “A Royal Taste of Scotland with Carolyn Robb, Former Royal Chef.”

Carolyn Robb served as a royal chef for 13 years, working closely with the Prince and Princess of Wales.

A Royal Touch in Scotland

“A Royal Taste of Scotland with Carolyn Robb, Former Royal Chef,” which embarks from May to October, will take guests to Edinburgh and the Palace of Holyroodhouse, Scotland’s official residence of HM The Queen; St. Andrews where the TRH The Duke and Duchess of Cambridge first met; the Royal Lochnager whiskey distillery, a favorite of Queen Victoria and Prince Albert; and Balmoral Castle, the Scottish home of the Royal Family since 1848. Guests also will step aboard the Royal Yacht Britannia for a private tour and dinner.

But with Robb herself from South Africa and the royal family based in London, why did she choose Scotland as the setting for her tour?

“It’s such a great place,” Robb explains with obvious excitement. “I have such happy memories of the times I spent up there when I was working for the Prince of Wales. It’s an undiscovered gem.”

Robb says the countryside is “absolutely beautiful,” and Edinburgh is a fantastic cultural center, which is where the tour starts. And to end the first day of this foodie fest, Robb and guests will enjoy a sumptuous four-course dinner on the Royal Yacht Britannia. The last time Robb was on Britannia was in the Philippines. The Royal Family was on hand when Hong Kong was handed back to China, and by extension, so was Robb.

“After we left Hong Kong, we sailed to the Philippines,” Robb reminisces, a soft longing in her voice. “[The Britannia] has traveled many times all over the world, and it’s now set up more as a museum at the docks of Edinburgh.” 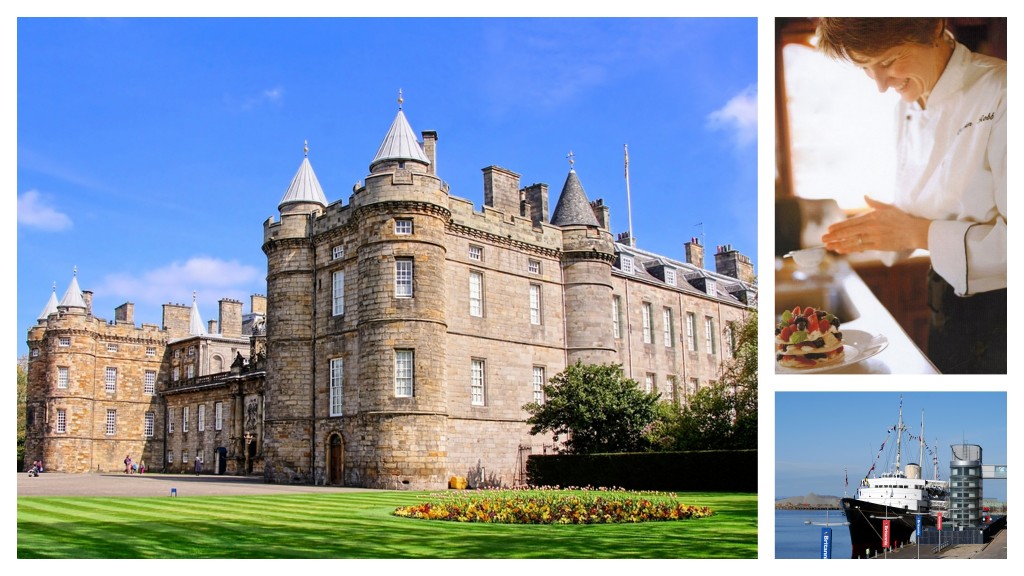 Experience a Taste of Scotland with Robb and Back-Roads Touring, including visitations to the Royal Yacht Britannia and Palace of Holyroodhouse. (Credit for Royal Yacht: Chris Jenner/Shutterstock.com)

Though Robb will not be cooking the meal aboard the yacht, she has been working closely with the chef.

“I will be designing the menu,” Robb says, “and it will change according to what produce is in season.”

She imagines the main course will be Scottish beef and that local wild mushrooms will be on the menu. She has recently been up to Scotland, meeting local suppliers, and making sure everything is ready and in place for the first trip.

“There is so much beautiful produce up there, but there’s one tour each month from May to October, so I imagine the main menu will change just a little bit each month to showcase the very best of Scottish produce,” says Robb.

Robb was born and raised in South Africa, and she first touched a wooden spoon when she was very young, learning from her English mother, whom she calls a “wonderful cook.” But her dream to one day cook for the royals began with her trips to England.

“As a child, I often came over to visit my grandparents, and we used to go London and go to Buckingham Palace and talk about the Queen,” Robb remembers.

The tours only hardened her resolve to rise to the ranks of royal chef, so she came to the U.K. and attended The Tante Marie School of Cookery in Surrey, where she gained her diploma in Cordon Bleu Cookery.

Notes Robb, “I was very fortunate. I was at the cookery school, and a job came up at the royal palace for TRH the Duke and Duchess of Gloucester. I was selected to go on an interview and got the job.”

At 20, she had achieved her dream of cooking for the British royals, if not Her Majesty. Within two years, she was offered the position of royal chef for TRH The Prince and Princess of Wales.

“It was the time when the Prince and Princess of Wales were at the height of their popularity, and the young princes were four and seven,” Robb recounts. “As a 22-year old, it just seemed to me like the dream job to work for them, and it was. It was an incredible job. I had so many incredible experiences, and most importantly of all, [TRH the Prince and Princess of Wales] were just the most fantastic people to work for.”

Being a royal chef is not an easy job with every day a new culinary adventure. 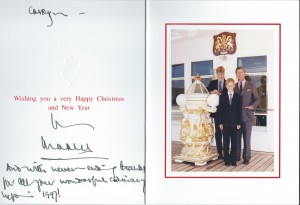 “It’s actually hard to describe what a typical day was because they were all very different,” Robb says. “It depended on where we were. We had days in London at Kensington Palace. We had weekends at TRH’s country home.”

Sometimes the royals and their staff moved depending on the agenda for the day, but there were kitchens set up for Robb. “We had to take ingredients with us, and if we weren’t arriving long before dinner, then we probably had to take some preparation. It was good to be organized.”

Though the kitchens were homey and not high-tech at the time of Robb’s tenure, she remembers the Royal Yacht Britannia as her least favorite place to work.

“The galley was very hot, and I wasn’t a very good sailor,” Robb laughs. “But wherever we went, the facilities were good.”

Robb and her staff prepared as many as three lunches a day and numerous breakfasts because Robb not only fed the royal family but also the staff. She was in charge of receptions, late dinners, and even snacks in the car between events, which is why it was important for her to be close to the royal family.

“I was very lucky. I had a really lovely apartment right in the top of the Kensington Palace,” Robb says.

Though she didn’t travel with the royal family on every foreign visit, Robb accompanied them frequently. Many times, the royal family attended state dinners and events, but not every meal was provided, which is where the royal chef would step in.

“We were there to look after the royal family, make sure they had breakfast; very often lunch with just a packed meal or sandwich in the car between engagements,” Robb explains. “There was also a large party with the royals, eight or ten or sometimes more people, so they needed to be fed as well.”

Robb is famously known as the creator of Prince William’s Chocolate Biscuit Cake that was used as his Bachelor Cake. So what was it about her recipe that made it so memorable to Prince William?

Robb didn’t have a favorite recipe when cooking for the royal family, though she enjoys making cakes, pastries, and desserts, and she frequently used vegetables from the garden and lamb from the royal estate.

“I just enjoyed cooking for the royal family,” Robb says.

The Royal Touch After Britain

After Robb finished her tenure with the royals, she embarked on a journey to the Middle East where she worked in Dubai for two years with the Chef’s Larder, helping to bring European foods to the city.

“There was a huge market for them, but they weren’t really available,” says Robb. “So we worked setting up some incredible French and Italian suppliers, and a few British suppliers and American suppliers.”

She also worked as a consultant for some of the five-star hotels. “Some the hotels called themselves seven-star,” Robb adds.

She evaluated the service of the hotel and then worked closely with the chef to improve what was offered.

She also wrote for Time Out magazine as a food editor, which Robb thoroughly enjoyed.

“I was finally on the other side of the kitchen door, reviewing 30, 40; sometimes 50 restaurants a month, which I absolutely loved.”

She reviewed the restaurants of Dubai for a year, sometimes providing establishments with their first true review. “It was an interesting time to be a food editor in Dubai because Time Out had just started there, and many restaurants hadn’t previously had any anonymous critical reviews.”

Later, she returned to the U.K. to work with new restaurants and food product development and events, before spending two years in California. She also has established three cupcake stores—Osaka, Manila and Hong Kong.

Now, she enjoys time with her six-year-old and two-year-old daughters, and of course, cooking, but her latest venture is The Royal Touch: Simply Stunning Home Cooking from a Former Royal Chef, a cookbook that encompasses Robb’s culinary journey from her mother’s kitchen to Kensington Palace, to the Middle East and America.

One of Robb’s favorites is the Eton Mess, a dessert of summer fruits, cream, and meringues.

“I love the summer in England. I love all the fresh fruits and berries, and that’s a recipe that can vary so much according to what’s growing in your garden,” Robb says. “If you don’t have berries, you can use mango and pineapple and passion fruit and mint.” 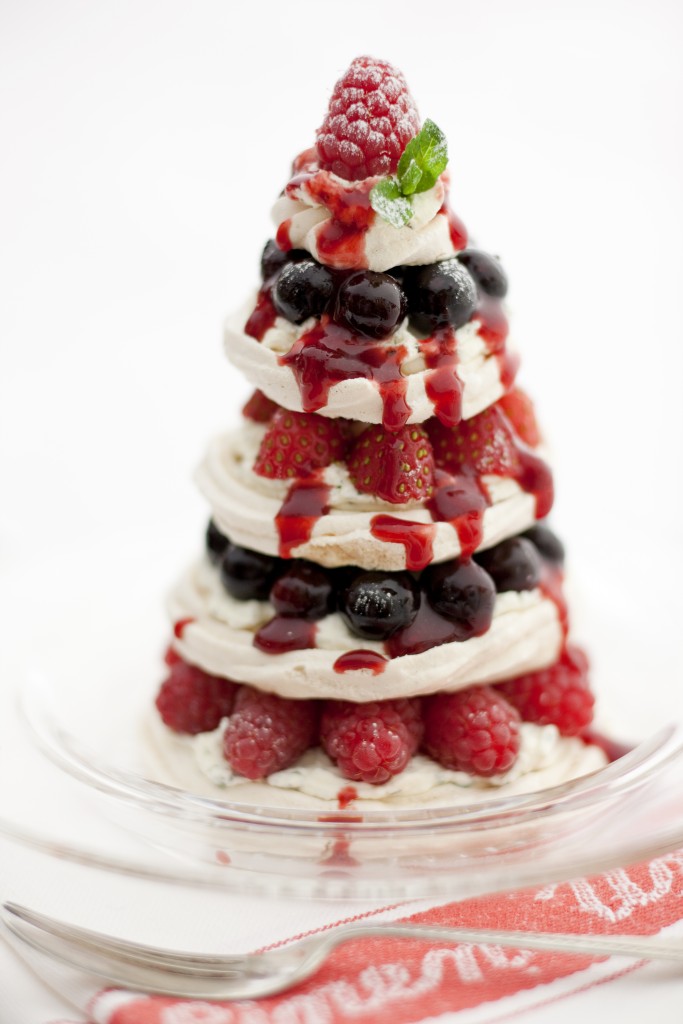 Find Eton Mess, one of Robb’s favorite recipes, in the next issue of On the Go: A Magazine for Travelers!

The book will be released by Antique Collectors Club Distributors this June.

Robb enjoyed working on her cookbook, so she’s hoping to compile another one in the future about breads, cakes, pastries, and desserts. Robb also would like to showcase ways to combine good food and exercise, and is exploring ways to incorporate the two.

But come May, she’ll board a bus with Back-Roads Touring and give guests a tour of a lifetime with her royal touch.