Disneyland is always magical, but there are certain times of the year when there’s just a little extra pinch of pixie dust. (Like this entire year, Disneyland celebrates its Diamond Anniversary!) But starting in September and lasting through the end of the year, Disneyland transforms first into a harvest festival before it becomes a holiday party. Go inside the magic of the season below!

Starting in September, Disneyland Park becomes a spooky wonderland with special autumn touches throughout the park. Guests are greeted with a festive Main Street, U.S.A., decked in harvest shades of orange, yellow, and reds, with Mickey-shaped lanterns hanging from each lamppost. Along the store overhangs sit hand-carved pumpkins, flickering with eerily candlelight, plus large, glowing pumpkins greet guests as they reach Sleeping Beauty Castle. 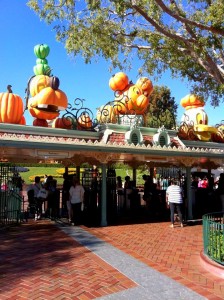 A Halloween Welcome at the Magic Kingdom

From there, guests can venture into other lands to find the Haunted Mansion Holiday with characters from Tim Burton’s The Nightmare Before Christmas; Space Mountain Ghost Galaxy with scary additions from the far reaches of space; and a skeleton display for Dia de los Muertos in Frontierland. (And don’t forget the Tower of Terror over in California Adventure!) At night, Disney’s Happiest Haunts Tour showcases all the bewitching festivities in the park, plus offers spooky tales and a special Halloween treat.

For the ultimate Halloween bash, guests must attend Mickey’s Halloween Party. This party offers one of the best fireworks spectaculars Disney presents, called Halloween Screams, as well as the brand-new Paint the Night parade; almost all the park’s regular attractions and the holiday-themed rides; photo opportunities with Disney’s villains; and all-you-care-to-eat trick-or-treating for guests of all ages.

Insider Tip: Though the Halloween Party has a separate fee, it is completely worth it. Tickets to the special event gets you into the park three hours before the event starts, and since there is an extra cost, the park is generally less busy during the party than it is during the daytime. So those favorite rides with long lines? You walk right on. Plus, free candy!

Related Story:  17 Things You Can Only Do at Disneyland 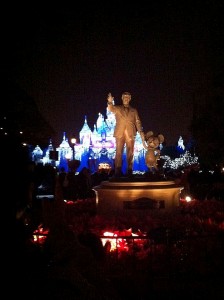 Holiday Lights at the Magic Kingdom

The winter season is a whirlwind of Disney magic, beginning with more than 80,000 LED lights on Sleeping Beauty Castle, transforming it into the centerpiece of a winter wonderland right in Anaheim. The holiday cheer continues with A Christmas Fantasy Parade; “it’s a small world” when the silver, white, and gold of the castle transforms into a colorful light display; and Haunted Mansion Holiday in New Orleans Square with the characters from The Nightmare Before Christmas.

Oh, and guests will definitely want to walk Main Street, U.S.A. for a special winter surprise.

The snowy celebration blows over into California Adventure with Disney Viva Navidad, a holiday festival with Latino music, dancing, and food; plus winter rides down Buena Vista Street.

Related Story: Eureka! Top 10 Things to See and Do in California

‘Tis the season to be booking! Grab your holiday magic now before it’s too late! (Mickey’s Halloween Party sells out early.)