Paris Through the Seasons

As the saying goes, Paris is always a good idea. But if you’re planning a future escape to the City of Lights, it’s an even better idea to plan around the seasons. (Or know what to expect if your travel dates are already determined.) Like just about every other destination, Paris changes throughout the year. And we’re not just talking about the weather. Some prefer the colorful blossoms of spring, while others may love bundling up to explore the festive atmosphere created in the colder months. From knowing what to pack and forecasting the crowds to adding specific events to your itinerary, here’s what you need to know about visiting Paris in the spring, summer, fall, and winter. 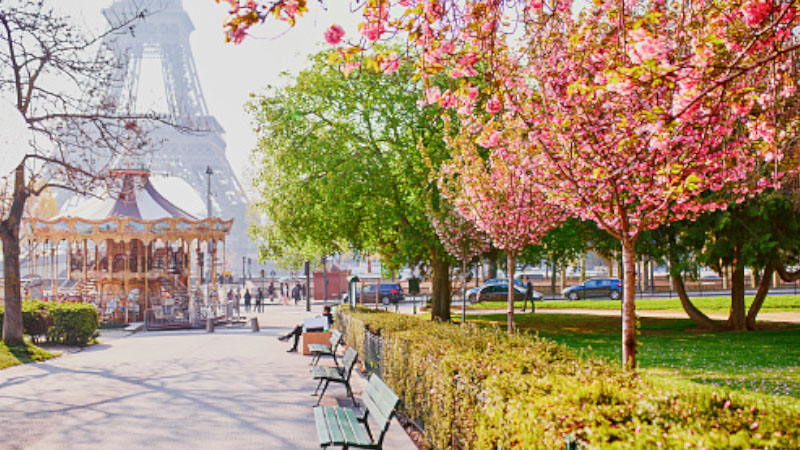 Weather & Crowds
When spring debuts in March, Paris is still on the cold side with an average high of 55°. But come May the average daytime temperature is a perfect 68°. As the city awakens from its winter slumber, visitors will be met with flower and tree blossoms in a rainbow of hues. Layers will help get you through early morning café runs and late night walks along the Seine. And an umbrella is key, as Paris gets around 12 days of rainfall a month this season.

One of the most ideal times to experience Paris, spring brings with it more tourists than the cold winter months but not as many as you’ll find during the high season of summer. It’s the perfect time to ride a  bicycle around town (complete with a basket holding your fresh baguette, bien sûr), buying colorful bouquets from the corner market, people watching while sipping espresso, and basically fulfilling your favorite Paris fantasies.

Paris Carnival
Also known as the Pantruche Carnaval and Promenade du Boeuf Gras (yes, that’s Fat Cow Parade), the Carnaval de Paris is a centuries-old tradition that actually includes a live cow leading a line of Parisians, trumpeters, and other musicians through the city’s streets to the town hall. (First Sunday of March)

Marathon of Paris
Whether you want to participate, cheer on the runners, or escape the area to avoid the crowds, it’s important to note that the Paris Marathon happens every April. Participants will get to run by some of Paris’ most famous landmarks, including the Champs Élysées, the Tuileries garden, and Place de la Bastille. (April 11, 2021)

Grandes Eaux Musicales (Musical Fountains Show)
Just twelve miles outside of Paris you’ll find the famous Palace of Versailles and every spring the fountains come alive to the tune of period Baroque music, adding another amazing element to your daytrip to this royal residence. (Beginning in April on every Saturday and Sunday through October and Tuesdays in the spring)

Nuit des Musées (Night of Museums)
Experience your favorite Paris museum in a brand new light when over 150 of the city’s museums and galleries stay open until midnight or later, including the Louvre, Musée d’Orsay, and Museum of Modern Art. You’ll find plenty of special events, including concerts, performances, and activities as well. (The third Saturday in May) 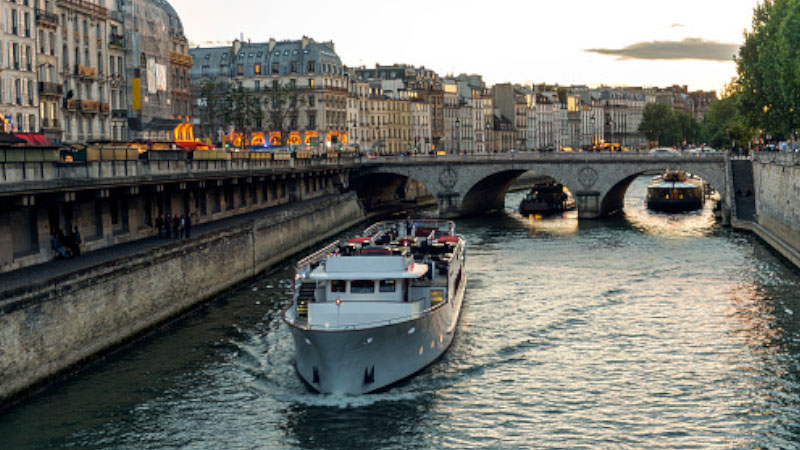 Weather & Crowds
The warmest and longest days of the year also bring the most tourists. With temperatures averaging in the high 70s, France’s capital city is practically perfect in the summer. Though there are more heatwaves (temperatures reaching 90°) than in the past, most of the time the weather is ideal for all of the outdoor events and activities. Along with traditional summer attire, pack an umbrella for summer storms and a reusable water bottle to keep you hydrated while you’re touring the city.

Summer is the time to enjoy sunny picnics in one of the many gardens and parks, an afternoon boat tour of the Seine, and after dinner drinks under the stars. Visiting the popular tourist spots will be particularly crowded, so we suggest checking those off your list first thing in the morning. Also, keep in mind that while the visitors flock in, the locals flee for the summer—especially in August. Some small shops and cafes may be closed while their owners go on holiday.

Paris Pride
Celebrating LGBTQ+ Pride is an international event taking places throughout the year across the world. In Paris, Pride takes place every June with a series of over 50 events including masked balls, film screenings, exhibitions, and more. The celebratory and activist event concludes with the epic the Marche des Fiertés (Pride Parade) at the end of the month.

Bastille Day
Commemorating the 1789 storming of the Bastille and the beginning of the French Revolution, Bastille Day showcases plenty of French patriotism. From the President-led military parade by the Champs Élyées to the explosion of fireworks over the Trocadéro, it’s the perfect way to immerse yourself in France’s history. (July 14th)

Paris Plages
A free summer event that started as a themed attraction and quickly became an annual favorite, Paris Plages transforms several locations in Paris into fun pop-up beaches, each with a distinct theme. You’ll find swimming pools suspended over the Seine, beach umbrellas propped open upon golden sand, friendly volleyballs games, and so much more. (July and August)

Rock en Seine Festival
With a lineup of internationally-known pop and rock stars, this annual music festival is one of the most important in all of Europe and takes place across five stages in Saint Cloud Park. Past performers include REM, Beck, Radiohead, Sonic Youth, Green Day, and many, many more. A family-friendly event, attendees will also find a ‘mini rock’ stage for kids. And you can even camp right on site (with your own tent and gear) if you buy a festival pass. (August) 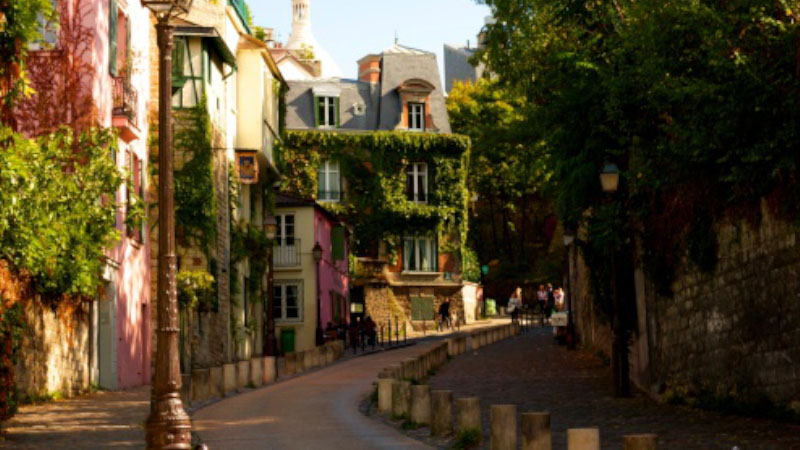 Weather & Crowds
Similar in temperature to spring (but in reverse, of course), fall sees a downturn in tourists and a reemergence of the locals with a host of seasonal events (many involving food and drinks). In early fall the days are still warm (with an average high of 70°), making it an ideal alternative to a summer visit. As the weeks progress, the weather gets cooler (November’s average is 52°) and you’ll want your jackets and scarves.

With emptier sidewalks and fewer lines at the major tourist attractions, fall brings the perfect mixture of traditional tourist excursions along with getting a more local experience. Equally beautiful as spring’s blooms, fall in Paris is awash in vivid shades of yellow, orange, and red. Bring your camera to the Jardin du Luxembourg or Parc Monceau to perfectly capture the autumnal hues.

Heritage Days
Get a glimpse into the parts of Paris usually closed to visitors during Journées du Patrimoine (Heritage Days). Every year visitors can peek inside over 10,000 buildings closed to the public, including privately owned chateaus, gardens, and even the Palais de l’Elysée—where the President of France resides. Many museums are also free for the weekend. (Third weekend every September)

Nuit Blanche
Perfect for night owls (or anyone who hasn’t adjusted to the time difference yet), Nuit Blanche is an all-night affair when everything from museums and monuments to parks and cinemas stay open until dawn. The city’s Métro also stays open later and revelers can take night buses around town until dawn. (Early October) 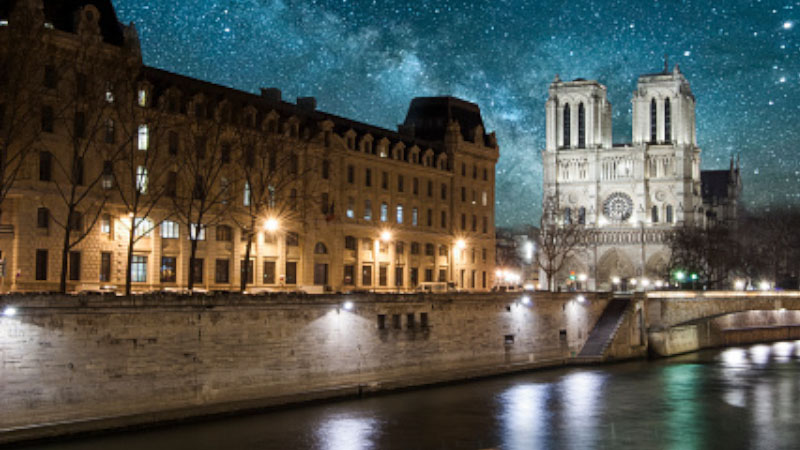 Weather & Crowds
The least favorite season for tourism also means the lowest number of crowds. Winter is the best time to experience Paris life like a local, as you stroll the city streets adorned with twinkling lights, decadent window displays, and festive décor.  The highs throughout winter average at around 47° with the lows in the mid-30s, but you could be hit with a colder spell. So pack plenty of warm clothes, or use it as an excuse to buy some while shopping in one of the markets or seasonal January sales.

Bundle up in your winter gear and experience one of the city’s open-air ice rinks, with spots in front of the Champs Élyées, the Jardin des Tuileries, and even the Eiffel Tower, before warming up with a hot chocolate or vin chaud (hot wine) inside a Parisian café.

Holiday Markets
Whether you’re looking for souvenirs or gifts for friends and family, Paris is filled with seasonal markets to explore. From the large market in the Tuileries Gardens, to smaller venues like the Alsace Market at Gare de l’Est, the Notre Dame market, and the Swedish market in the 17th arrondissement, you discover regionally made items as you shop among the locals. (December through early January)

New Year’s Eve
From braving the crowds to small, intimate events, you can ring in a new year any way you want. Experience a light and sound show at the Champs Élyées with thousands of other revelers. Another favorite celebration spot is the Sacré Coeur plaza in Montmartre, which is more laidback but delivers impressive views of the Paris skyline. Or skip the outdoor events and head to a cabaret show, such as the classic Moulin Rouge for delicious food, plenty of Champagne, and iconic entertainment. (December 31st)

International Agriculture Show
The countryside of France comes to Paris during this top event held every year at the Porte de Versailles. Similar to our version of a state fair, you’ll be able to taste and purchase every kind of French food imaginable. Ideal for bringing the whole family, there’s a petting zoo, horse shows, and a dedicated children’s section. (Late February)

And that’s the beauty of Paris… there’s something spectacular to experience all year round. If you’re dreaming about your next trip to the City of Lights, contact your GOGO-backed travel advisor to help get you started. And for up-to-date information on these or any other destinations, visit our parent company Flight Centre Travel Group’s COVID-19 Travel Map.