What better way to celebrate the witching season than by exploring some of our favorite spooky places that are perfect for a future Halloween getaway. From discovering the famous village where the Salem witch trials took place in 1692 to following the path of Jack the Ripper in London, we’ve rounded up some eerie places to help you celebrate All Hallow’s Eve.

Legend has it that in 1560, Pope John Paul II coined the term “the Witching Hour,” the time of night that falls between three and four in the morning when witches were at their most active and when their powers were at their strongest. In the Roman Catholic Church, there were times throughout the day set aside for prayer and devotion called canonical hours. They took place in the day and evening… but not after midnight. It was thought that the lack of prayers during this time only made the witches’ powers that much stronger.

In 1542,  English law passed the Witchcraft Act, a law that made it a crime for a person to claim to have magical powers. The Witchcraft Act would be revised throughout history in 1563, 1604, and 1735 during peak witching hunting years. In 1692, witch hunt hysteria spread from Europe to much of colonial New England where the Salem witch trials began. Those who were found guilty of witchcraft were punished by death. Those interested in this dark period of history (also famously depicted in Arthur Miller’s The Crucible) can visit the villages in Salem where the witch trials took place. Many of the accused witches were held in the jail in Salem town (modern day Salem), as well as jails in Ipswich and Boston. The Salem witch trials began in Salem Village, now a small suburb just outside of Salem called Danvers.

The London alleyways of Jack the Ripper 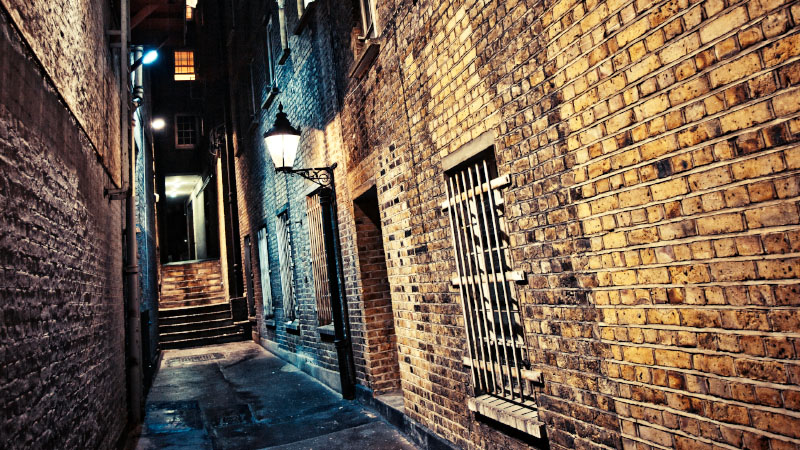 When Scotland Yard received letters signed by someone who called himself Jack the Ripper, London investigators were ready to close the books on this open case. The man responsible for terrorizing London’s impoverished East End in 1888 with the gruesome murders of five prostitutes had finally confessed and identified himself as the one and only killer. There were at least two problems though. First, they had to catch him and second, they had to catch him before he could fulfill his promise to kill more people. While Jack the Ripper claimed the lives of five people, some say it was more. However the actual number is unknown.

Jack the Ripper mutilated his victims’ bodies with precision leading investigators to believe he had a formal background in human anatomy. After about a month, the murders suddenly stopped. Now more than 125 years later, the real identity of Jack the Ripper has still never been revealed and he remains one of London’s most notorious unidentified killers. Tourists can take walking tours through the East End of London where Jack the Ripper emerged from the dim gaslit alleys to terrorize his unsuspecting victims.

Death is colored with life and life is colored with death in the morbidly joyous Dia de los Muertos (Day of the Dead), a holiday that originates in Mexico and celebrates the lives of those no longer living. Traditional illustrations of skeletons, festive sugar skulls, streamers of brightly colored flags cut into intricate designs (called papel picado), and flowers for the dead are seen during the celebration. Ofrendas (altars) are set up in the homes and final resting places of loved ones and decorated with photos of the deceased, the papel picado streamers, alcohol, food, and water to honor and entice the deceased to come back for a visit. The Aztecs developed this ritual about 3,000 years ago and to welcome their ancestral spirits to the land of the living once a year. The Aztecs believed in celebrating the lives of their ancestors, not grieve over loss. In fact, mourning wasn’t allowed because it was believed that tears make the path from the dead to the living too slippery.

The restless souls at the Fairmont Empress in Victoria, BC 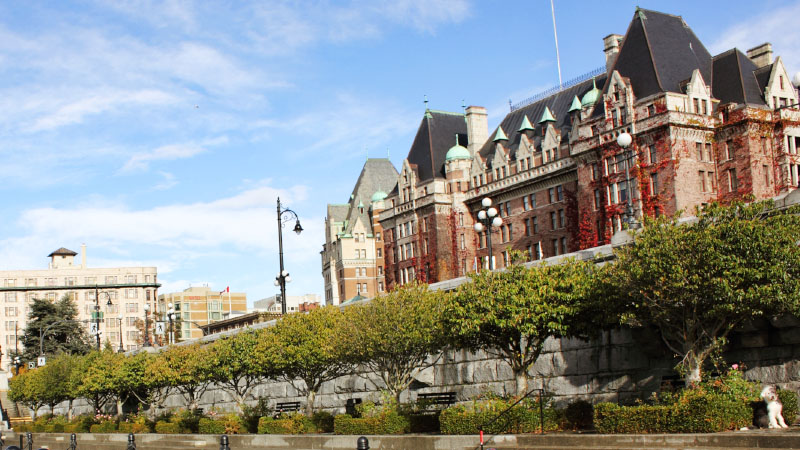 The Fairmont Empress opened in 1908, making it one of the oldest hotels in Victoria, BC. It’s well known for its Afternoon Tea and its regal interior that evokes being inside the Queen’s Castle. With over 500 rooms, some of the finest dining in the city at the Q at the Empress, and outstanding customer service, guests always have a great stay. But, with more than one hundred years of history, you can bet that there are a few folks who checked in… and never checked out.

In fact, there have been regular ghost sightings at the Fairmont Empress for decades. Like the room attendant who stepped out onto a fire escape to clean the windows on the sixth floor in 1919, but fell to her death after not realizing the stairs had been removed during construction. Sir Francis Rattenbury, the architect who designed the Empress, was murdered by his chauffeur (who just happened to be his wife’s lover) when he went back to his homeland in England in 1935. There also have been a few sightings of one of the hotel’s carpenters, who died during the construction of the hotel at its very inception.

The Fairmont Empress says it’s not unusual for guests staying at the Empress to leave comments about unusual sightings and odd events. Maybe the architect has a few words he’d like to share?

The haunted houses of Universal Studios

Trust that the dark, twisted imaginations that run the horror biz (and probably invented irrational fear) will put on the most frightening exhibits you’ve only seen in movies—or your worst nightmares. Universal Studios in Hollywood, Orlando, and Singapore offer Halloween Horror Nights, some of the year’s scariest, most intense Halloween events. In fact, these theme event comes with a warning that it may be too intense for young children and is especially not recommended for children under the age of 13 (especially after dark). Unfortunately, Halloween Horror Nights have been cancelled at all locations this year. But make sure to add it to your future fright night plans… if you dare.

If you’re ready to plan your Halloween adventures for 2021, contact your GOGO-backed travel advisor to help get you started. And for up-to-date information on these or any other destinations, visit our parent company Flight Centre Travel Group’s COVID-19 Travel Map.