The Tinder for Hotel Guests…kinda 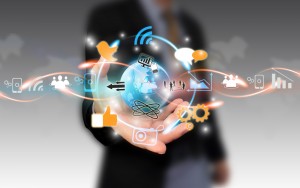 Traveling for business can be lonely as Marc Lewis, founder of Social Media 180, learned when staying at Caesar Palace last year. Instead of eating dinner alone, Lewis wanted a way to connect other business travelers and share a drink and a meal, or just pass the time. That’s when Lewis can up with HelloTel app, which allows users to “check-in” to a hotel, see others who have the app and are nearby, and offer “kudos” to posts, comments, and even private messaging.

Originally, the app was designated just for business travelers, but since launching last October, the app has more than 200,000 users, which are split 50/50 on business and social users. Users are able to sign-in using their Facebook or LinkedIn account.

But the app is more than just a networking outlet. Find out what else is instore for HelloTel in HelloTel app enables guests to check in and connect.

A drought at the Grijalva River had dropped the nearby reservoir by 82 feet, and when some reservoirs dry, usually there’s just miscellaneous rocks and animals. But in the Nezahualcoyotl Reservoir, people come to see the church. Built by monks who arrived in the region about the mid-16th century, the church was abandoned when a plague ravaged the area from 1773 to 1776. In 1966, the area was flooded when a dam created the reservoir. The last time people saw the church was in 2002 during another drought.

“The people celebrated. They came to eat, to hang out, to do business. I sold them fried fish. They did processions around the church,” said a local fisherman during a telephone interview with the Associated Press. Now, instead of catching fish, he catches visitors who want to get a closer look at the church.

Where else can you see drowned cities? Check out It’s Back! 16th Century Mexican Church Emerges From Receding Water.

I hope you haven’t had enough of Frozen yet. With a sequel movie, book series, new Walt Disney World ride, and musical all coming within the next few years—you have years of Frozen news ahead of you, starting with the WestJet makeover of one of their Boeing 737 planes.

Watch the plane’s transformation below!

Notes The Walt Disney Company Managing Director Marlie Morrison in ETurboNews.com, “To see our vision come to life is so exciting, as we collaborated on this project for over a year. Only a very small group of us (WestJetters and Disney Artists and Cast Members) knew, and we had to keep our secret under wraps… or should I say, on ice.”

Yes, she went there.

Discover some tidbits about the plane (and just how many bagels were consumed in the painting of said jet) in A Plane So Cool It’s Frozen.

Confession: I was wondering what Amazon would do the travel industry when they launched Amazon Destinations last spring. Look how the company revolutionized retail (not to mention book selling and book formats), but Amazon Destinations, which specialized in selling hotels for weekend trips within driving distance, “closed” on Tuesday. According to Travel Weekly, all existing bookings will be honored, but neither the website nor app are selling hotels any longer.