All Aboard: Cruise News for Week of August 3 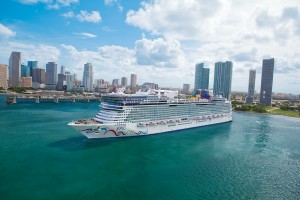 Norwegian Cruise Line announced its new itineraries for the Fall/Winter 2016/2017 season, including a return to Asia and Australia after a 15-year absence, plus NCL’s first ever voyages to India and the Gulf.

Norwegian Star will continue to sail in the Baltic Capitals from Copenhagen, Denmark through summer 2016 before starting its Gulf itineraries in Oct. 2016 with calls in Turkey, Greece, Israel, Egypt, Oman, and UAE. Then the ship will head to Thailand, Malaysia, Singapore, and China for November 2016 through January 2017. Norwegian Star will continue onwards to Southeast Asia and Australia with stops in Thailand, Vietnam, Bali, and Brisbane, before sailing about Australia and New Zealand and then starting its return trip. She will return to the Mediterranean with a March 2017 departure from the UAE.

Norwegian Epic will sail through Europe in the summer before heading to the U.S. in November 2016 for three-, four-, and seven-night voyages to Eastern and Western Caribbean, and the Bahamas. Epic will be the newest and largest NCL ship to call Port Canaveral its homeport. The Eastern Caribbean itinerary includes stops in Tortola, British Virgin Islands; St. Thomas, US Virgin Islands; and Great Stirrup Cay, Bahamas; while guests enjoying the Western Caribbean itinerary will see Cozumel, Mexico; George Town, Grand Cayman; Ocho Rios, Jamaica; and Great Stirrup Cay, Bahamas. From January to March 2017 Norwegian Epic will feature three- and four-day Bahamas cruises with stops in Nassau and Great Stirrup Cay.

Norwegian Spirit will offer Eastern Mediterranean and Western Mediterranean sailings, plus two 11-day sailings to the Holy Lands. Cruises will depart from November 2016 through May 2017 from Barcelona, Venice, and Istanbul, which will be the first time NCL has offered a Turkish city voyage. Ports of call will include cities in Croatia, Greece, Turkey, Italy, Monaco, Spain, France, and Malta. Spirit will also offer two 10-day Canary Islands and Morocco itineraries, one in December 2016 and one in March 2017.

Norwegian Jewel will sail to the Panama Canal with two 14-day cruises in February, departing from Los Angeles and Miami for ports in Colombia, Costa Rica, Nicaragua, Guatemala, and Mexico, plus a daytime transit through the Panama Canal.

Norwegian Sun will cruise in South America for Winter Season 2016/2017 with departures from Rio de Janeiro, Brazil; Santiago (Valparaiso), Chile; and Buenos Aires, Argentina. Itineraries will include stops in Uruguay, various cities in Brazil, as well as the Falkland Islands and Argentina, plus offer sailings through the Patagonic Channels, Chilean Fjords, Strait of Magellan, and Beagle Channel to the spectacular Cape Horn. Guests on voyages can opt for on-shore excursions to Machu Picchu, Iguazu Falls, and Easter Island.

Travel Pulse reports that Viking Ocean Cruises has delayed the start of Viking Star’s next cruise due to a propulsion problem. The Aug. 8 departure in Bergen, Norway is now scheduled for Aug. 10 in Copenhagen, and passengers have been encouraged to arrive in Bergen as scheduled for two-day accommodations and tours at Viking’s expense. A charter will bring passengers to Copenhagen on Aug. 10 for their cruise, which has been modified with a day in Copenhagen, a Kiel Canal transit, a day at sea, and a stop at Le Havre, France. The ship will resume its original itinerary on Aug. 15. Viking Star experienced issues with their electronic transformers during its July 25 cruise that forced cancellation of the remainder of the voyage.

Celebrity Cruises announced 14 new experiences called “Evenings Around the World,” which will be available on the newly announced overnight stays. The experiences will be available as of January 2016 and include events in Cozumel, Mexico; Aruba; Cartagena, Columbia; and more. Some events include jazz evening bonfires, wine tastings, sunset cruises, and explorations of colonial mansions.

Travel Weekly reports the South Carolina Ports Authority has asked an Army Corps of Engineers for a permit for a $35 million cruise passenger terminal in Charleston. The author wants to install additional pilings under a waterfront warehouse where it hopes to build the terminal.

Travel Weekly reports that Carnival must modify its entire fleet, including its Princess Cruises, Holland America brand, and its seven ships under construction, to comply with the Americans with Disabilities Act. The adjustments will make three percent of all cabins accessible with three levels of accessibility and all Carnival employees will receive ADA training. Plus, Carnival will appoint ADA compliance officers shoreside, and each ship will have a ADA officer. Reservation systems, website, and apps will allow disabled passengers to reserve accessible cabins and suites and guarantee reservations for accessible cabins. The changes come after the Justice Department received complaints about reserve cabins, modified policies, practices, and procedures, as well as effective communication during muster and emergency drills.

According to The Report, MSC Cruises has become the number one cruise line in Europe by having a capacity of 1.1 million passengers across its fleetwide, announced MSC Cruises in a statement.

Princess Cruises is partnering with Celebrity Chef Curtis Stone with “Crafted by Curtis” menu items available in the main dining rooms, a new specialty restaurant concept and menu design by Chef Stone, and a new Chef’s Table experience by Curtis Stone. The offerings will be fleetwide by the end of 2015.